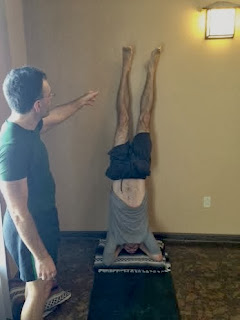 Mind you, I still have 27 days to make it happen, but I'm not hopeful. Maybe it's the length of my arms to the ones in my legs, but getting my knees into my armpits might be futile.

However, months ago, I've tried to take a new philosophy to this whole approach - to stop saying: "I can't".

I used to say "I can't" about headstands as well.

Not that I'm completely trying to rationalize my physical and mental inability, but in most classes, there is a flow and where they might take time to readjust you, the instructors don't really have time to advance your skill set. The classes are too big.

And too crowded - space-wise. No one wants a newbie (or oldbie) teetering over and falling on top of them. There isn't that kind of room usually. Heck, they don't want that even if there is room.

Last Saturday was the exception.

David and I got to class at a new studio (free passes, dontcha know) a few minutes ahead of time and we were the only two people there. This would-be, almost individual instruction, was short-lived as five others showed up at the very last minute (or even late to the class).  Drats.

Still, it was a nice space and seven folks is not a big class. And when the instructor asked if there is anything we'd like to do during class, David chimed in for me - on the headstand. I had to inform the instructor I didn't need help getting better, just being able to do it at all. To be "better" would have to come later.

Overall, the class was great. Billed at an hour and fifteen minutes, we went for almost two hours. It was a tough work out. The both of us really enjoyed it.

The instructor tried to get me into headstand and her tips were helpful. However, not as helpful as David and the other male in the class, Steven (or possibly Stephen). Both gave me pointers and I was up in a ridiculously short amount of time.

It took a few tries to get my neck in a position that didn't compress (but that neck compression s.u.c.k.s. and is painful), but other than that.......

Well, not completely "other than that"...  I did my headstand against a wall. I swear it's not cheating.

One should (?) do this to find where they are, in getting to their goal without hurting themselves or others. At least that is what I tell myself. But seriously, it was important to me to find how to get into the pose, where my balance center was, and how to safely come out of the pose

So I did it over and over - maybe four or five times till I got comfortable.

Lest you thinking I'm being overly proud of myself, I only need tell you the rest of the story. After that, I got to watch Steve doing a handstand - and doing push-ups in that pose at that. And I got to view that while being upside down.

So my next goal - even before Crow, probably - will be to do the handstand with no wall assist. I'm feeling good. I'm feeling confident.


Oh - and Steve also gave me a tip on how to roll my mat so when I unrolled later, the bottom and top edges would not curl.

It was a helpful class.

Song by: Philosopher Kings
Posted by Blobby at 12:04 AM

will you and david be returning to this class?

Be careful. I used to think I can do anything until my body betrayed me. My leg is still jacked up because of it and will be the rest of my life.

Does doing the headstand affect that problem spot? How about sharing the mat rolling tip? Please ;)

that is admirable
You inspire me to get back into yoga in 2014.