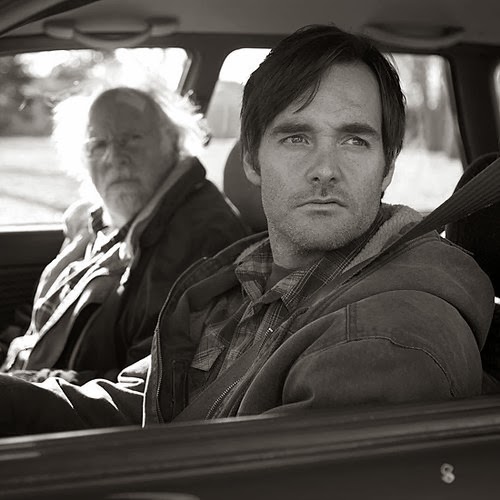 We are getting closer to our 2013 movie goal - but three weeks and three movies to go. Yikes, we're cutting it close.

At least in Ohio, there are not a ton of new releases we want to see - those are still a week or two away, which could make for a very busy xmas to New Years.

Still, I think we both wanted to see Nebraska, which we did last Sunday. Mind you, I had heard very little about it, other than knowing the director and that Bruce Dern was in it and supposedly great in his role.

With the film title and the black and white photography, it is hard not conjure images of Springsteen's album of the same name: sparse, bleak and open roads - the movie and album have much in common - though if I had to pick just one, it would be the album, as it is a great disk.

I'm actually hesitant to say whether I liked the movie or not, as I still have not decided. It's well done, but it didn't wow me. While I've seen Dern on HBO here and there, it is quite possible, I have not seen him on the big screen since Alfred Hitchcock's last film, Family Plot.

Dern is good, as is Will Forte. And the woman playing their wife and mother, respectively, does an awesome job.

Back to whether I liked it, I would say it made me uncomfortable to a degree. Maybe it's too much introspection and too close to home, regarding minimal communications skills between an aging father and his son. Or maybe it's just an Alexander Payne movie.

I never liked Sideways. And it took multiple cable viewings of both Election and the Descendants before I actually liked them. But I don't see me watching Nebraska on cable over and over. But I said that about the Descendants too.

Like the album, Nebraska, the movie is more about the journey than the destination, but that is probably true of many of Payne's films.


Oh - on a side note: we got to the theatre and there were only two people there (at that time), so naturally, I walked up to their row and ask, "do you mind moving down?"

I'll give it to the guy, he just quizzically looks around at the 250 other open seats while his "wife" gets up to move. I couldn't even keep a straight face. 710 wasn't nearly as mortified as I expected him to be.


Song by: Bruce Springsteen
Posted by Blobby at 12:08 AM

Hmmmm Had a rather higher opinion of it than you did - but I also liked 'Sideways' a lot more too, as also 'The Descendants' from the first time I saw it:-