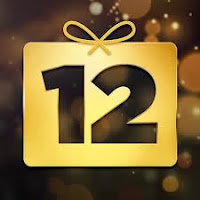 Actually, I think it's been two or three months since I've actually done an App of the Month segment. My bad.

While not planned to hold onto this for today, it kind of works. It is the 12th, after all.

Did I mention it was free? The app and the gifts?

It could be something awesome like a cool game app or a Miley Cyrus download - which is like the equivalent of getting a lump of coal in your stocking - but you know with the NSA and all, Apple knows when I've been good or bad.

You still have plenty of time to get the app, as the presents don't start arriving until December 26th - which I kind of found odd. One would think.

Oh, who am I to judge (I know, I wasn't buying that line either)? It's some freebies from Apple.

If I don't like, I can delete them, I suppose. If I get a really cool app, I get two gifts - another post for next month!

I always enjoy your app of the month; i've learned a few 'keepers' thanks to you!