Wanted (Or Waiter, There's Some Soup in My Flies) 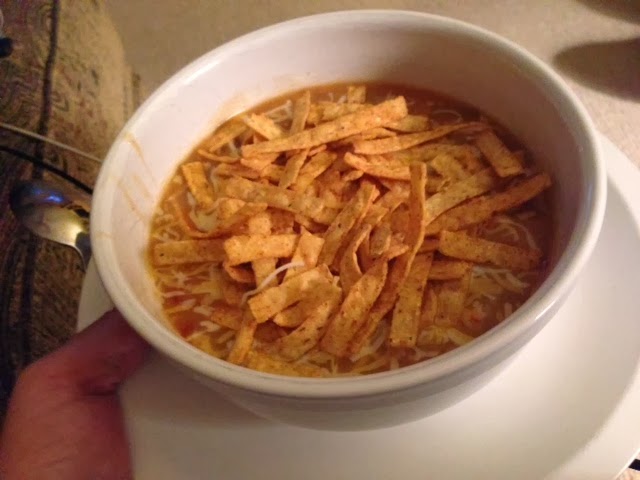 Here is why I love Winter - and yes, it's a stretch: Soup.

As you've read: I've made chili with iffy results. It tasted good, but not what I was expecting. The spicy tomato soup I've cooked for dinner worked well a few times. There was that broccoli-cheddar soup that didn't really work at all. My first attempt at chicken tortilla soup was like the chili - tasted fine, but not exactly what I was envisioning. Such is the life of a "chef".

Both 710 and I are big fans of Max & Erma's Chicken Tortilla Soup.

Now, I know most of you have never been, or even heard of, Max & Erma's. They are / were a Columbus based restaurant "chain" where 710 and I had several dates and meals starting back in the mid '80s. It is also where Jon and I heard some guy compare his fish dinner to 'snatch' he had recently sampled somewhere else.....to the girl at his table who queried him with "whose?". Loverly!

Max & Erma's tried to expand to at least north eastern Ohio and somewhat failed. They moved too fast and half the places they opened have been closed. I think Pittsburgh has one - or did 5-6 years ago. I think the original in German Village is still open.

Anyhoo....they make a chicken tortilla soup that I love - and especially in the colder months.

During our current cold snap, I decided I would make an attempt at replicating it - ala Sandra Lee (that semi-homemade slut), though there seems something wrong with making soup out of other soups, but that's what I did.

There are a ton of recipes out there for M&E soup, and of course, not one of them are the same. So to complicate matters, I took bits and pieces from each one and came up with a decent concoction, though not quite hitting the exact mark.

It still worked and both 710 and myself liked it.  I just forgot to take my traditional pics along the way. Sorry.

Dump everything but the chicken into a dutch oven or heavy pot and bring to a boil, stirring more than occassionally so things don't burn on the bottom. Reduce to a simmer, cover, and cook for 1 hour.

Add chicken (you can use a rotissarie chicken, if you'd like) and simmer for another 30-40 minutes.

Dish up. Top with cheese and tortilla strips.

Obviously, if you're so inclined, you could do a little more work yourself with cooking chicken, shredding cheese, making your own chicken stock, and using real mushrooms, celery etc - but that's not happening for me during a weeknight. I'm also not cutting corn tortillas and frying them either.

Things I'd do differently?  Really just one. While the Rotel and green chilies are fine, you'd probably get away with diced tomatoes and some seasoning, but I would definitely add jalapeño.

The soup didn't have enough "heat" for me, though it is very hearty and can really be used for a meal.

This made enough soup for two dinners (for two people) and I had 2-3 servings for lunch during the week. It was heavy on the chicken (more than M&E puts in), but I was going to use up all the cooked chicken, damn it.

I'll make this again for sure.

Song by: the Style Council
Posted by Blobby at 12:09 AM

we used to have an M&E's nearby; it's now something else.

yeah, their soup was good but it needed more chicken.

I love spicy food but a can of regular Rotel is usually enough to push the envelope for me. My husband uses it in everything which explains the dedicated pantry shelf.

I can't watch Sandra Lee without wondering if she has a drinking problem.

I think there is a M&E on Dussel Drive off of I-475N in Toledo that is still open. And they were opening limited menu stores on the Turnpike.

(Topic suggestion: I never heard of the Cleveland snow belts until I was in college and the Cleveland kids told me about them. I thought they were just jerking my chain. Then when I dated a guy in Gates Mills I experienced the odd weather pattern firsthand, You occasionally mention the strange weather where you live; you might explain why it is so different from any place nearby.)