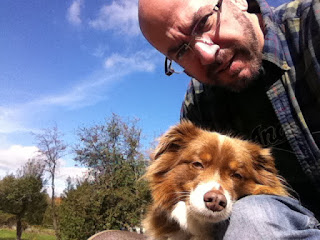 That might be a bit of an exaggeration, since I have never, or probably will ever, donate a kidney or bone marrow to any of my sisters, but if they ask me to pick up their dogs, I'm more than willing to go out of my way for those canine cuties.

One of my many sisters was out of town and axed me to check on the doggies.  She never mentioned the cats.   At one point, I was going to sleep over in case Petey was still sick - he wasn't.  Or not enough so that it was necessary for me to temporarily move out the way-suburbs to tend to him and them.

We made the trek out and they were very very happy to see us.

I love Petey - and I shouldn't say this, but he is my favourite.  Not just of their current dogs, but any dog they've had. He's my buddy.

Boomer, whom you see here, is certainly quite the cutie and he ranks up there, but he was a distracted puppy.  Doggie ADHD.

Now into his fifth year, he's calmed down quite a bit.  A Miniature Australian Shepard, he is smart as a whip.  He not only knows how to open screen doors, he's figured out the sliding glass door and the actual doors with knobs on them too.  He has also taught Petey how to do most of those things.

He's gotten smarter about not herding cars and getting a paw run over.  Crazy dog.

The pooch also eats the head off of every flower he's ever seen and literally eaten his water bowl.  Weirdo.

But as time goes on, he's become a little more attentive and loving. He's always been that way with my sister, but now with others, he likes to hang out and take pets.  He's not big on giving kisses though.  What's up with that?  I love doggie kisses.

A year or so ago, one would have never been able to get a picture of Boomer with some body.  Now, he sat and kind of posed with me. 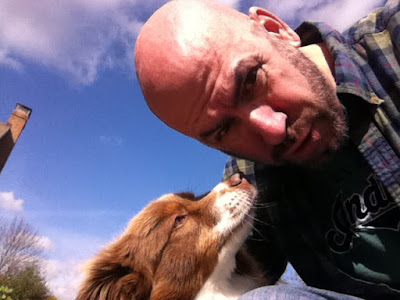 Yes, I've already been taken to task for 'not smiling' in my pictures.  Suck it.  I'm over that comment.  I'm happy.  You've heard it before, you'll hear it again:  I look Asian in pictures when I smile.  It's not a good look for me.

Anyways, when I'm with the dogs I'm smiling.  Inside.  Where it counts.

Just two views of Boomer and he's already won my heart. (But any dog at all would.) Such a sweetie that I could easily forgive his distinctly odd behaviour. However, give your fave Petey a nosey-kiss from me too, will you?

how touching!
I love dogs, and I love people who love dogs.