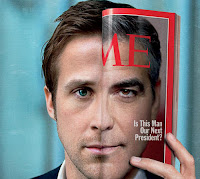 On Sunday we saw the critically so-so Ides of March.

I've seen glowing reviews, I've seen just-ok reviews.  In reality, it is somewhere in between.

The story itself is seemingly tried and true when it comes to politics and political thrillers.  I will give it that the script has multiple layers that keep getting pulled back as the movie goes on.  Some are predictable, as one might imagine, but some are not, but it keeps you interested.

It is my second Ryan Gosling movie in as many months, and my third in a lifetime.  He seems nice and all, but has one affect.  One.  Does that make him an actor?  Does he pick roles for his limited range or do they pick him for limited character - or just a face that will get a certain demographic to buy tickets?

I love (not), how the plot centers around the Ohio presidential primary.  And yes, they use the phrase, "as goes Ohio, so goes the nation."  That might be true in the general election, but not the primary.   But I am not a fan of that any election anymore centers around Ohio as decider - good or bad.  There are times when being a fly-over state doesn't seem so bad.

While George Clooney writes, directs and stars in the flick, his acting role is a little more limited. The movie is based more around his operatives, which I find more interesting anyways.  I like movies and shows about process and while this has some of it, it is not the center of the plot.

The word "Ides" comes from the Latin word "Idus" and means "half division" - hence not just the movie poster, but how the movie's political game is played.  No doubt all of campaigns are played this way.  Quid Pro Quo - and even the most honorable campaigns are probably anything but.


The story certainly moves along and I was engaged, but not engaged - you know?  The joke is on me of course.  No movie regarding politics these days is going to be peaches and cream, and if it were, I'm too cynical to believe that storyline or ending - so either way you're - um....I'm - frustrated.


Once again, a movie that is garnering Oscar buzz for Clooney as director and Gosling as actor, but I don't see it.  If Clooney gets the nomination or win, it doesn't do much for the view of general Americans that Hollywood is too liberal.


Don't get me wrong - I'm pretty liberal, or at least anti-Republican. And yeah there is a line about how the Dems don't get down in the dirt with the elephant and that maybe they should.  I couldn't agree more.  It is nice to take the high road, but it hasn't gotten us anywhere.  Only eight Dem presidents in 100 years says something, no?


So Ides is a good movie, but I didn't find it great.  My opinion of course.


...and naturally I chuckled just a little bit at the marquee outside the theater: 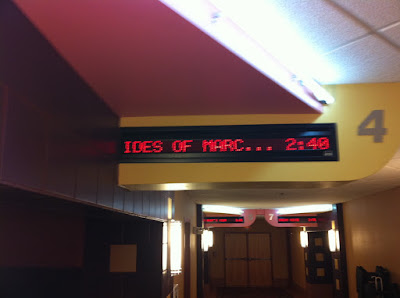 Funny they Ides of March has been on my mind lately as well.

So true - at least I am trying to make it true.

I skipped this movie; doesn't sound like fun entertainment for me. I like movies to escape into fantasy, not remind me of life or work.