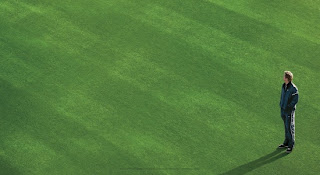 "It's hard not to romanticize baseball."

It's a great quote from the movie Moneyball.  And downright true.  Ok, at least for some of us.

While I understand that everyone might not get that, as everyone is not a fan of the game, but the film worked for me on many levels.

C'mon, statistics and baseball?  It brings out the geek and the pseudo-butch in me, not that it is too difficult to succeed in those areas.  Hey, I said 'pseudo'!

Even as the sport is dominated by what are basically card-counters, it is still not hard to romanticize baseball.

Rotten Tomatoes and MetaCritic gave the film high ratings (95 and 87 respectively), and it is good.  In articles that I have tried to avoid until seeing the films has Oscar buzz about Brad Pitt playing Billy Beane.   Eh.  Aaron Sorkin might be in the running for a second consecutive award for his co-writing the script.

Pitt is nice enough, but except for Mr. & Mrs. Smith, I haven't seen anything much he's done that has grabbed me.  He is pulling a major Robert Redford vibe during part of this - in acting and looks. Pitt is fine and everything, and even good here, but if he gets an Oscar for this, then the competition isn't that strong or people just want reward him for just being him.

Jonah Hill was ok too, but merely a tamed down version of his Superbad self.  While the brains behind premise of the movie premise, he really just comes off as some well-timed comic relief here and there.  He could have and should have been more.

Chris Pratt (a goofball in Parks & Recreation) and Philip Seymour Hoffman put in decent performances too - as the hopeful and cranky, respectively.

Still, it is a great story - and a true one - and it was well written and well acted overall.  And while I can be a wuss, I'm secure enough in my wuss-hood to let you know in one scene I slightly teared-up.  If you go to the movie, chance are you'll know where I'm talkin' about. 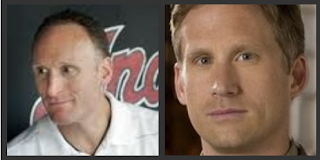 It was a little Cleveland fun for us.

If you're counting, this makes movie nine for us.  Three more to go, and unless there is catastrophic illness or something, there is no reason we should not make that goal.  A first.  I already know what our October movie is going to be.  Yes we saw Moneyball in October, but it really was our September movie - and our September movie was our August movie.  We will see another film before the end of October, no worries.

I am even pretty sure I know what the November and December movies will be as well.  Sure, Denton gets a vote, but mostly we are on the same page.

sorry it's not going to be your team and mine in the world series; I was kinda looking forward to it.

we may get stuck in a repeat of the 2009 series - us and the cheating yankees.