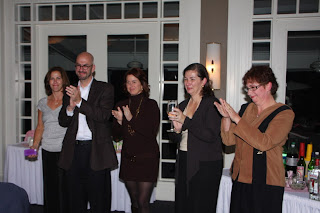 Over the weekend we had a birthday celebration for my father's birthday.  His 90th.

I should let you know that my father had his 90th birthday 10 months ago.  He turns 91 in two months and one week.

Clearly, my mother who insisted on doing this was a little behind schedule.  I also don't know the impetus to go with this party.

Normally, my father eschews this kind of event, especially where he is the center of attention.  But he really seemed to enjoy himself and was lively.  Well, as lively as an almost 91 year old can be at a dinner hosted at a country club.

In attendance were some cousins, an aunt or two, an uncle or two, some long long long time neighbors (ok, three couples - but they've lived near my parents for 42 years), and four sisters (see above)........and myself..........oh our spouses and my sister's kids, or most of them.

The company was pretty good, the food was pretty bad.  But at least they are consistent.  I'm not sure I've ever had a decent meal at this place.  The dessert was good.  And well, as you saw in yesterday's post, the bar was an open one, ergo, it was good too.

I can't say there was time enough to truly socialize with some people for more than a minute or two.  Maybe that's the way it should be.  I have few social graces, so what the frick do I know?

My mother did ask us kids to get up and say something, and I was hoping no one would remember that request.  Alas, she did and my eldest sister said she'd stand up there with me while I spoke.  Fun.........for her!

As it turned out, you can see we all stood up.  My little sister started and I finished.  The others were eye candy, I guess.   It was a nice, but short, tribute to my father.

BTW, I love my glasses, but in each pic taken, they look like they've slid halfway down my nose - I'm not liking any of the pics at all.  At least the ones with me in them. 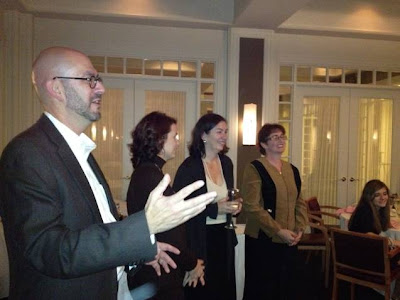 Three of my sisters and myself.  I was thanking all attendees and wishing my father a happy birthday, both 90 and 91....since i wasn't sure which one we should be focusing on. 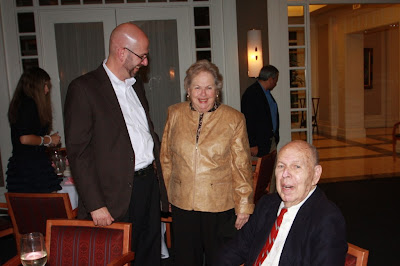 Here is me, then me in 43 years and me in 38-ish years with a "blonde" wig.  It's my dad and his sister. Genetics are a scary scary thing.

I really need to work on my posture when I'm drunk.

It's very cool that he seems very spry and is effing 90! almost 91!

Kudos to Pop!
An open bar at family affair is like New Jersey and you, perfect together.
Count your blessings.

Awwwhhh... that's sweet that you and your siblings gave a speech to honor your Dad. :) Good for you!

many congratulations to the Father Figure!