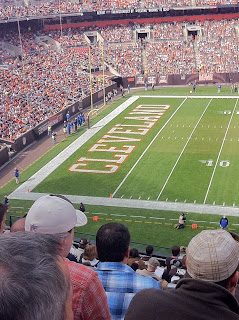 Last game, I don't even think counted. It was an exhibition game in July of some unknown year.  T-shirt, shorts and sandals were worn.  Hardly football weather.

The way some people find baseball boring (not me!), is the way I feel about pro-football.  I mean, I like Ohio State football and all, and while one could argue with all the exchange of goods and services for $$$ that go into that program one could classify it as 'pro', allegedly it is not.  Allegedly.

I'm never sitting down on a Sunday (or Monday night) to watch a football game.  I just don't care.

I won't say I was duped into going to the Cleveland Browns - Seattle Seahawks game, but I certainly didn't ask the right questions when presented the opportunity. And even if I did,  I wouldn't have gotten the right answers, through no fault of our hosts.

One might have been led to believe that we were to be in loge or skybox.  One might take from that, that the seats were enclosed from the elements if need be.  For the record, Club Seats are not the loge/skybox.  They were nice.  They were padded.  They were outdoors.

Ruckiry (not Jon's boss), I don't think we could have had a nicer football Sunday.  Sunny and 62.  Granted, the sun was on the other side of the stadium, but it was still a no jacket kind of day.

One was also led to believe that food and drink were included in the - gulp - $200 per seat tickets.  Sorry, but for that price someone should have been peeling my grapes!

As it turns out, no longer in that price is food and drink included.  It seems at one time it was, but I suppose pro sports have fallen on hard economic times too.  And while our friends Tom & Sal got the tickets from work at no cost to them, we did feel the need to shell out for the food.  It was the right thing to do even if it was so-so food at not so-so prices.

I got a Philly Steak  & Cheese sammich......but I'm 99% sure it was brisket.  It was ok, but not what I was expecting....or wanting.  I get brisket at my mother's for Sunday dinner, not at a football stadium.  Still it was a small fortune price to pay to be out with friends.

Oh, and there was a game, I guess.  I know enough football so I wasn't a complete boob about it.  We sucked.  We won when we probably shouldn't have won, but to be fair, Seattle sucked too.  A game of three field goals.  Two for us.   Whoo-Hoo?

The great thing, of course, is we got to hang out and laugh with Tom & Sal.  They are fun and funny.  They live three houses away and are just great to be with.

I also have to show you this pic of me.  I think it kind of makes my case for not posting 'smiling' pics. 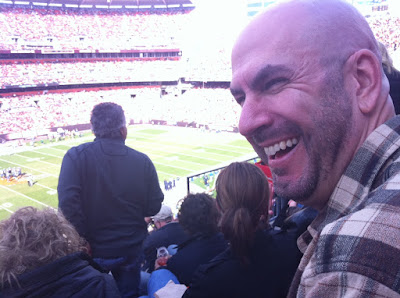 First off, when did I get so many crow's feet laugh lines?  And secondly, it's that 'ancient Chinese secret' thing going on too.  And man, what a honker.  Yikes.

Song by: Neil Young
Posted by Blobby at 6:19 AM

Put on your glasses. That is a wonderful picture of you! I love it! Your smile reaches your eyes. That's the kind of smile that makes others smile back. Own it.

My husband has spent decades trying to get me to enjoy football. I was 19 when I found out what "first down" meant. I can pick out a few plays now, but not with what I'd call interest. We went to Purdue games for many years, but now he knows to ask someone else to join him. We may have Peyton Manning here—except this year—but football just never has done it for me.

Awesome re-cap...
and you're WAY to hard on yourself (hard on - ROR) about the picture...it's a good one.

and you DID NOT have a proper philly cheesesteak. brisket? oh hella no! sounds like you had a hot roast beef and cheese.

Ha! You crack me up. Baseball IS boring... but I can see your point about football if you live in Ohio. Cleveland, Cincy, and Ohio St. sucks. Now in the South, where we have the 5-2 New Orleans Saints that can put 62 points on the Indianapolis Colts, and LSU (#1) that can put up 45 points on Auburn, FOOTBALL RULES!!!

The bar I go to for beveraging plays sporting events on all the televisions there. I only watch too see the hot men in their uniforms. I still think there would be more interest in professional sports if everyone was required to play naked.

And that's not a bad picture of you. At least you're not drooling and snorting.

I know exactly what you mean about football. It wasn't until my senior year of high school that I realized that first downs weren't marked in specific places on the field. Give me a break, I played drums....