It's official.  As of 18:19 yesterday, Cleveland broke the all time precipitation record. Since it rained most of yesterday, we surpassed 53.84 inches of rain - and it's still raining.  Well, it is as of this drafting.

....and we still have two more months to go before the end of the year.  Oh, this record is going to be hard to beat.  Hell, this last one stood for 140 years.  With climate change, this new one might only last 2-3 years, tops.

But with going with the flood theme, let's turn to the Ark.  So, they weren't two-by-two, but this story of the released exotic animals in Ohio is certainly the way we like to get on the national news.  It is a horrible tale (ha! tail!!!, get it?) of a man collecting wild animals, letting them go and then killing himself.

I don't give a crap that he killed himself.  Call me heartless.  But if he was going to off-himself, why let all his animals out knowing what their fate would end up being?

I cannot really blame animal control or the police force for not being able to handle lions and tigers and bears.   Yes......oh my.  Being a gay man, I'm contractually obligated to say the 'oh my' part.  Anyways, there was no rounding them up and finding new homes or zoos for them.  It was frickin' Zanesville, Ohio - home of nothing.

So here is what ended up happening, and I'm not happy to show it. 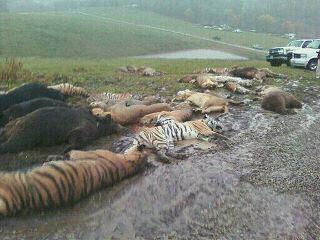 This is even worse than Evan Almighty - and let me tell you that was possibly now the second worse thing I've seen that includes animals.

See how I bring it together?  Floods, Animals. Arks.  I'm good!


On another note, I had a nice lunch with my cousins, Bill & David yesterday.   David axed if any new features were coming up in my blog-world.  Ummmm......no.

Song by:  Lone Justice
Posted by Blobby at 6:41 AM

It's amazing the shit that happens in Ohio. If only they'd mysteriously make it into Columbus and visit Linda Harvey.

Housebot please, A water proof one that can paddle.

"...why let all his animals out knowing what their fate would end up being?" I'm guessing he was just trying to give the animals a fighting chance to survive. If the man had killed himself without first releasing them, they may have spent days or weeks dying of starvation before anyone came around and found them. Which is a worse fate for the animals? Starving to death locked in a cage or being free to at least have a chance at life?

My speculation: the man tried to give the animals away to as many zoos as he could think of, but when none would take them and he ran out of money, he killed himself. Again, my speculation.

The Zanesville event was distubing on multiple levels.
First for the innocent animals.
Second for the State of Ohio that has relaxed laws concerning exotic "pets". And a govenor that let what little restrictions were in place expire.
Finally for a citizenary more concerned with "Dancing with the Stars" than they are with good government and personal safety.
For Ohio this time the tragedy involved animals, the next time it will be firearms.
After all now we can bring guns into bars.

Good blog blobby. But you dont fool me. I know you are somehow involved with the Army of the 12 Monkeys.

That's a horrible image of the animals. But what would make someone even have such a collection of wild animals like that? I can barely care for my basil plant.

as a brit...the over kill here was just awful

Thanks for posting this, I heard about it via I-radio here in France..but to see that image blows up the story.
What the hell?
I agree with Brian.

That whole deal really upset me. Those poor animals-- in captivity, then released and confused... and then shot.

It really makes me want to punch something. and then cry.