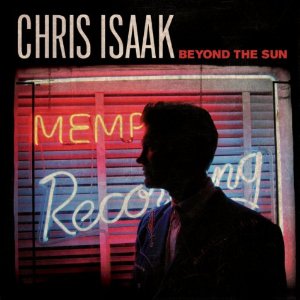 I have been a big fan of  Chris Isaak's debut in 1985 and he has done some incredible work. Beyond the Sun, his ode to the work done at Sun Records, is good, but it is not ranking amongst his best works. Hell, this isn't even his work.

I get that Isaak was retro when retro wasn't cool. I get that many folks have made years worth of comparisons of Isaak's voice to Roy Orbison. Isaak doing a cover of "Only the Lonely" did not help that cause to distance that.

He is in good voice on this disk of Sun Records artists and songs, but it doesn't really sound like his voice. Johnny Cash's songs sound mysteriously like Cash; and Elvis' songs sound like Elvis. They barely sound like Isaak doing Cash or Elvis.

Cover records are hard to do in the first place, but taking iconic singers and their best known material makes it all that much more difficult. In theory Isaak has the chops to pull it off, but he doesn't put that much of his spin on it and they come out more like imitations than interpretations.

I expected and wanted more from this disk. It's good, just not good enough.
Posted by Blobby at 6:50 AM