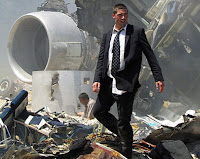 So yesterday was not the day for travel.

It was a seemingly full moon, but I suspect it wasn't a complete one.  Wax or wane, I think it was off a bit.  Enough.

The day started ok.  Upgraded to first class, which I like, obviously. It was totally for the extra setting space and leg room.  Since I had to be up at 3:45 and out the door by 4:15, my only order of business was to sleep.

I am getting better about dozing, not sleeping, on planes.  Before, I'd never get a minute of shut eye, now I can do multiple minutes, but not one of those people who can sleep the entire flight away. I wish.  But in reality I'd be the guy who has his jaw open.  While not snoring or drooling, I would look like the guy whose life just ended and set in that state of suspended animation.  Not pretty.

That was just the flight to Denver. At the plane change, it was more.......complicated.

By this time, I was wide awake.  And very very late.  But I don't sweat those things too much - they are out of my hands.  My boss, who I was meeting also had delays.  We ended up getting in withing 10 minutes of each other.

At least third plane was a charm.

It was an ugly day.  A Jamba Juice at DIA and that was it for food until dinner. Since we were running behind, there was no time for lunch or anything else.  I had a splitting headache and probably still will when I wake up in the middle of the night, Pacific time.

Such is the life of me.

Song by:  Tom Petty & the Heartbreakers
Posted by Blobby at 6:12 AM

It's hard to sleep on a plane. I've never been able to, even on Trans-Atlantic flights.

I have the annoying gift of being able to sleep just about anywhere. I think it's because I run until I drop, so any time I'm still I fall asleep.

Sounds like a rough business day. I hope it ended with a cocktail and hot tub.

I'm SO behind on blogging and reading that I just saw the Scooter video on here!!! How fun.
I'm sure he would be honored.
PS - I finally posted an entry. :-)

You should take up studying quantum physics, invent a transporter, and sell it to everyone so no one ever has to go on an airplane again.