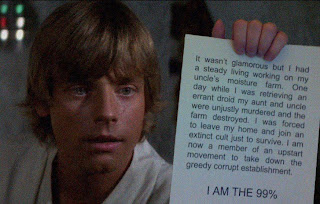 Don't get me wrong - I'd like to be.  Who wouldn't want all that cash?  But unlike the 1%, I'm pretty ok with paying my fair share.

There are varying degrees of that remainder.  To ignore that is just downright foolish.

I get that by not paying their fair share is what helps "them" become that 1%, but really - how do they sleep?  Probably in really nice digs under 1000 thread count sheets - that's how.

In theory, I empathize with the movement, but it is too disjointed for me. Everyone showing up to complain about "something", though most have their own agenda so it is beginning to sound like a big whine session.

The richest folks do not pay their fair share of taxes.  I'm on board with that.

Education is too expensive and they can't pay back their loans.  Ok.  Check. I get it.

Wall St. is unregulated and making life difficult for the majority and the bail out and subsequent terms of that bailout have been ignored and all of the fat cats have gotten fatter.  Got it.

There aren't jobs, or good enough jobs, for the youth of today.  Umm.  Maybe.

Yes, employment and job development is not what it could be.  Yes, companies have jobs to hire trained, competent people in many positions and they are going outside the U.S. to find them - if they are to be believed, because our higher education system is not doing the right things by them.  ...and I do love the stories of students (or their parents!) calling instructors/colleges to say they paid for the education and they should be getting the right grade since they forked over the cash.  "Give me the grade I want, not the one I earned!"  Um....I don't think that is the way it works.  Or maybe it does now.

We have brought up our youth to get trophies for just showing up.  Why wouldn't they think they are entitled to whatever they want?

What I don't get are the parents of this generation, who are my age, are/were usually a hard working bunch who made our/their way up and worked hard for what we have.  We got that from our parents. I did. Where did the break down between our generation and our kids actually break down?

Education is expensive, no doubt. I will say, I have a hard time sympathizing with the "kid" who admittedly excelled at math and science in high school, went to the college of his choice based on that, and majored in poetry, only to being on camera at a OWS event and bitch that he could only get a job sweeping up saw dust in a wood working facility.

No offense dude, but the world owes you nothing, let alone Wall Street.  I have utter respect for poetry, but no one is there to guarantee you a check for that to pay off your loans, let alone with a dream job. That is not how it works.

I also like the people who are employed (or under employed) who willingly go in print or on TV and disparage their current employer.  I'm guessing that goes far with them {sarcasm!}   And it amuses me that they protest against corporate America - blogging and tweeting about it on their Apple products from the closest Starbucks.  I'm guessing they don't see the irony in that. .

I don't recall ever bitching and moaning about paying taxes. No really. Nor have I dodged them. To me, paying my fair share is the right thing to do. Would I rather not?  It'd be nice to have extra cash, so sure. But who do we think will pay for infrastructure and programs we all use?  I do think that 1% needs to step up to the plate, or be forced to.

So for that point, I do like the idea of OWS, but only if they were focused in their protests.  But like the generation that the majority of this occupation represents, they want it all and they want it right now.

Song by: Dusty Springfield
Posted by Blobby at 7:32 AM

I like to think of the OWS movement as the Tea Party movement, but for people with IQs over 50.

Everyone keeps saying the OWS needs more focus. Here is the truth - if they were more focused it would start a civil war.

Well, our parents and grandparents put in a system that is unsustainable, so the younger generation is getting saddled with paying for that. Not only is it not fair, it's wrong. The "math" of social security doesn't compute and they know it. I bristle at the calls of "lazy" because camping out for weeks on end is work in my book

Oh and another thing. Why is education so expensive? So that only the well to do can have access to it? Here in Quebec, we have the lowest costs for education in North America and that's because they/we believe that it's a universal right. Why do we have to go into debt for a higher education? We don't for elementary and high school.

Liberals are a disjointed bunch. By nature. And we like it that way. We believe in the individual. We enjoy the differences. We celebrate them, even if we don't fully understand them. Hey, if it feels good, do it. Do your own thing. It's a free country (until it's not).

We bristle at organized campaigns. We see every side of an argument. We enjoy debate; we love analysis. We adjust our positions when confronted with new information. We're flexible, and we like that.

That's why liberals in general, and the Democratic Party in particular, seem so unfocused. We are. And that's not a bad thing. Until we run up against the juggernaut of lockstep rigid dogmatic doublethink that is the Tea Party/Republican Party and the people who finance (and use) them.

I have no answers. I can't imagine liberal minded folks like me all agreeing and thinking exactly alike. That would make us... um... not liberal.

But, while we may not be able to craft a coherent campaign, we all know there is a problem. And we all know that it's not going to get better with the right wing in power.

I would so totally OWS... but I am NOT taking my 600 threadcount sheets and my Patagonia sleeping bag to some makeshift tent!