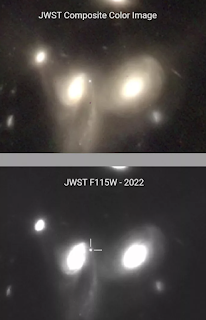 Grated, I have an untrained eye. Eyes. Plural. So, I don't know what I'm really seeing in the Webb telescope images.

The bright object dimmed over a five-day period, suggesting that it could have been a supernova, caught by sheer luck shortly after the star exploded.

Scientists.  They don't know anything. One day, horse dewormers are a good cure for Covid, they next they don't even know if a picture is a supernova.

First off, here is how to calculate what 4 million light years looks like.

I'm just saying, if you have to go to the Power of 19 to put in a calculation for milage, this is going to take forever on a AAA Trip Tick.

But I assume that if you're looking at the cosmos with a device that can see things that have never been seen before, it's almost always going to be "sheer luck" that whatever is found is found. I'm kind of hoping for weekly discoveries. I would think it would almost have to find those.

At least that is my hope.

Stats like this never cease to blow my mind. I never tire of it.