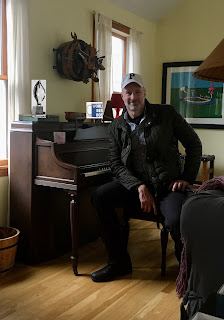 Sources have confirmed that this marks the 10th annual Oscar pool in which Blobby and I have participated. I’m half expecting to find a box on my doorstep from Blobby commemorating our 10th anniversary. “Tin and Aluminum” is the theme for said occasion for all of you last minute shoppers.

My ballot has been sitting in my in-box for days. When you’ve only seen (and disliked) one movie on the entire roster, one’s motivation can wane. But the old competitive spirit has kicked in overnight – and it would be rude – really – to forego a milestone anniversary such as this one.

And we all know about Blobby’s fragile ego. So let the games begin…

ACTOR IN A LEADING ROLE: CHADWICK BOSEMAN
Just the name of this movie should be awarded with an Oscar! And who know that Anthony Hopkins was still making movies. Ring-ring. Hello Mr. Hopkins? It’s the pasture calling.

ACTOR IN A SUPPORTING ROLE: DANIEL KALUUYA Judas and the Black Messiah
If I remember correctly, Daniel was the first winner announced at the recent Golden Globes and his Zoom microphone went dead in the water, having all remote business workers across the nation shout the oft-repeated phrase “Your microphone’s on mute!” For that humiliation, I bestow this Oscar.

ACTRESS IN A SUPPORTING ROLE: YUH-JUNG YOUN Minari
I’ve heard that if enjoy a laugh-riot, I should catch Glenn Close’s performance and makeup in Hillbilly. But a fake nose does not an Oscar make (well, let’s forget about The Hours with Nicole Kidman, shall we?). I’ll put my money on the young lady from Minari.

ANIMATED FEATURE FILM: SOUL
Since Dumbo is not on the list this year, I’ll go with Soul.

DIRECTING: NOMADLAND Chloé Zhao
I think this movie will sweep many awards. It’s the only one that I’m even hearing of.

DOCUMENTARY (FEATURE MY OCTOPUS TEACHER
Whoops! Forgot I saw this one. If this doesn’t win, something fishy is afoot.

DOCUMENTARY (SHORT SUBJECT): A LOVE SONG FOR LATASHA
I do love a good documentary. Having said that, I’ve seen none of these….

FILM EDITING: THE TRIAL OF THE CHICAGO 7
I’m getting the feeling that I should have watched some of these films. But binging on “The Great British Bake-Off” is so much more satisfying.

INTERNATIONAL FEATURE FILM: ANOTHER ROUND
Although “The Man Who Sold His Skin” sounds like comedic gold, let’s go with Another Round.

MUSIC (ORIGINAL SONG): SPEAK NOW from One Night in Miami...;
“Speak Now’. Or “Speak Later”. Don’t matter much to me.

SHORT FILM (ANIMATED): IF ANYTHING HAPPENS I LOVE YOU
Sounds sweet.

SOUND NOMINEES SOUND OF METAL
Spoiler alert! When you put the name of the Oscar category into your movie title…hello?

This song truly did elicit goose bumps and tears, and was a fitting emotional climax to the movie: https://www.youtube.com/watch?v=qjuphuG3ndw

I hope it wins.

I won’t make guesses at movies , not seen . I love Frances McDormand ,Viola Davis , Anthony Hopkins and Most especially Glenn Close. Close is the only one of these who doesn’t have an Oscar. The role is more Comedy than serious, about the effect of Opiates in Appalachia , Dammit Give Close an Oscar. She is the last true star of her generation without one! Maybe next year!

I enjoyed the pared back Oscars and the unique venue. It made the entire program worth watching. Three high points for me were the hilarious acceptance speech from Youn Yuh-jung, Tyler Perry's acceptance speech and Glen Close's excellent trivia knowledge and celebratory "Da-Butt" dancing moves.