Everybody Loves a Winner 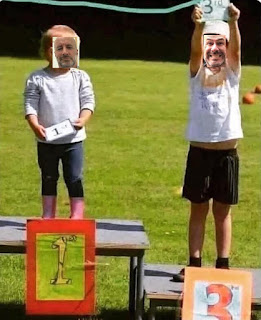 This Oscar season has been anti-climatic. But being our 10th, maybe this has become like a marriage tolerating each otherand just trying to make it through to the next year.
And it's tough to get behind something where no one has seen just about anything.  They may as well all been Akira Kurosawa films..........or worse, Michael Bay.  .....and all starring Drew Berrymore and Billy Bob Thornton.........or worse, Adam Sandler.
I did not win.
I am just putting it out there. Once again, it was the "Year of Mike".  It's all very tiresome.
Mike won by one.
It's possible I could have tied - or he could have won by two, save for the fact that I forgot to include 'sound editing' in the ballot.  Ooops.  Still he won.
I will pay up and a bit more timely this year. Possibly.
As for the title image, oddly, I stole the original from Mike's husband, Peter, a few weeks back. I was going to make two versions, one with me being #1 and one with him in that same ranking. The original has the winner looking sullen and over at the joyous loser.
For the life of me, I could not find a picture of him facing that direction. So, I asked for Peter's assistance. I swear to g-d, this was the (hilarious) reply

Maybe he's a-scared of that whole Alfred Hitchcock silhouette thing he's got going on.
I kid of course. He doesn't know who Hitchcock is.
I watched a little bit of the show. It was different and yet not horrible. There was no one to play people off from their on-and-on-and-on-and-on speeches. I mean, there was a DJ, but everyone talked. And talked.
We watched maybe less than half, then 710 couldn't stand it anymore. Then I went to bed.
Anyhooo............
Results tabulation was completed by Dominion Voting Systems (providing fraud-free elections since November 2020!!!). Auditing, as always, done by the firm of Dewey, Cheatem & Howe.
ACTOR IN A LEADING ROLE: Blobby won
ACTOR IN A SUPPORTING ROLE: both won
ACTRESS IN A LEADING ROLE: both won
ACTRESS IN A SUPPORTING ROLE: both won
ANIMATED FEATURE FILM: both won
CINEMATOGRAPHY: Blobby wins
COSTUME DESIGN: both won
DIRECTING: both won
DOCUMENTARY (FEATURE): Mike wins
DOCUMENTARY (SHORT SUBJECT): Blobby wins
FILM EDITING: both lost
INTERNATIONAL FEATURE FILM: both lost
MAKEUP AND HAIRSTYLING: Mike wins
MUSIC (ORIGINAL SCORE): both won
MUSIC (ORIGINAL SONG): both lost
BEST PICTURE: both won
PRODUCTION DESIGN: both won
SHORT FILM (ANIMATED): Mike wins
SHORT FILM (LIVE ACTION): both won
SOUND: both won
VISUAL EFFECTS: Mike wins
WRITING (ADAPTED SCREENPLAY): both won
WRITING (ORIGINAL SCREENPLAY): both won
Mike axed me if we needed a real accountant......as if we could afford that.
But congrats to Mike......................again.
Song by: Linda Ronstadt
Posted by Blobby at 12:07 AM

Congratulations to Mike, hope you get your dog Pics. Sadly anyone who had to watch the program was a loser. Lowest ratings ever. Pandemic go away don’t take everything! You are a gracious 2nd place! Mr. Blobby!

Hehe James said you were “gracious”. You two have not met?

It sure was a humdinger of an Oscar night! Having seen nearly nothing, I am surprised we both did as well as we did. But one of us did just slightly better. But really - i didn’t even notice. Did I win? I did???

Ten years! How time flies when one wins year after year! Blobbly has always been the ballot-maker, main instigator, and vote tabulator. For real, all I am reauired to do is to sit back and submit the winning ballot! Thank you Blobby for your lovely tribute to me and the hilarious photo. You really do look very excited to be up there on that (below first place) podium!

To make things easier for you next hear, I shall start taking and saving side profile selfies. I am a giver, what can I say.

And dont be silly — you don “owe” me anything for your public trouncing (insert martini emoji here). The joy was all mine!

Til next year my friend!