Yet another installment in the drudgery that is everyday shopping. The camera-phone makes it a bit more fun - though I get looks whenever I take pics of products. Like I care what people think 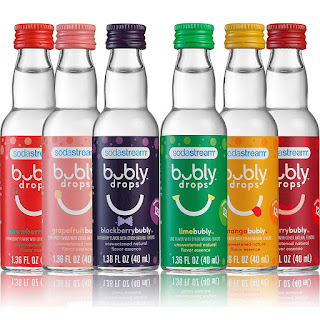 So to lead up this - a little backstory.

About 20 years ago now, I gave up soda. Cold turkey. Every morning I used to drink a 20 oz Dr. Pepper after I arrived at work. But after seeing how much sugar was in a 12 oz can, I stopped right then and there.  Kind of.

That same morning I got a Diet Dr. Pepper, took one swig, found it 10x sweeter than regular, tossed it in the trash and started drinking only water at work.

But I ditched soda at home, but went for lemonade. It probably had as much sugar too. And about five years ago, I just went with water - tap or La Croix or now some of the Bubly flavours.

And when we bought this "new" house, the previous owners started to put in a fizzy water contraption.

It would have been easy if they used just a soda stream thingy, but no........pullers, levies, canisters, compressors, tubes etc.  Except that they never quite finished the job before divorcing, moving out and selling to us.

It took 710 months (on and off, of course) to order parts, get parts and figure out how to make it work. And it does make carbonated water, but getting the flavour part isn't quiet there yet - though right now we're at an N of 2.

We tried the above Bubly drops. First off,  it's tough to get a single flavour - so we went with the multi-pack. The lime in the can is DE-scusting. I'm not about to try it here.

While the instructions say 3/4 of a teaspoon for a liter of water, I wasn't about to drink a liter. So we tried an eyedropper to measure things out. No matter how much we played around, the flavour never came. Forget a wrong mix, just almost zero flavour. Period.

The amazon reviews made it seem like we were doing something wrong - save one. The person said, "it tasted like something, but it wasn't grapefruit".  True that.

So, we're off to another source to see what is what.

I figure if I can find that, I'll be saving the earth a little bit by getting rid of buying cans of water.

I buy bottled bubbly water and mix it (by the glass) with fruit juice. I use mostly store-bought cranberry juice or apple juice or grape juice. The juices come with no "added" sugar. It's pretty good, and satisfying, but not all that portable unless you put it into a thermos or something.

I like water, unfortunately bottled water is so convenient, flavor , is not an issue. I went from Coke , to Diet Coke thru all their products then. Quit, also used to Drink Iced Tea if it was homemade. Funny how a pandemic pares things down. I take Vitamin D every day , at the moment
our diet is not consistent . My mother got three Rx vitamins last week but she’s 89. Thanks with your cooking segment and TV watching of movies and music, that someone is trying to have a somewhat traditionally untraditional life out there! The cherry 🍒 looks good!

Of course if you're really cheap like me, you'll keep the carbonated water setup and just buy lemons or cucumbers to add slices to your drink. BTW if you decide to grow your own cucumbers in season, will there be a new Farming with Blobby segment?

I was not aware you did not drink soda. Sensible fellow.