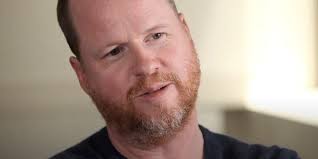 Well it's sucking these days to be Joss Whedon.
He's gone past #metoo to #methree.
Apparently, the guy is abusive and a royal douchebag. Shocking.
Save for Buffy, Firefly, the first Avengers movie and of course, Dr. Horrible's Sing-a-Long Blog, I don't really know from him.
Now mind you, I put a LOT of time into Buffy. But Cordelia, two decades too late, spilled the bean on how horrible it was on the set for the women thanks to Whedon. While Buffy herself wasn't quite as vocal to this admission, she kind of semi-silently confirmed Cordelia's story. Willow has been mum on everything, as far as I can tell.  Dawn? Nowhere to be seen or heard.
But with Justice League - or whatever it's called - he kind of stepped in it with sexism, racism and misogyny.
I guess I didn't know he jumped from the Marvel Universe to DC.  Oh - and I can't state this enough:  I. Don't. Care. either.
But he took his bad behaviour to DC. And it sounds like their one person of colour in the Justice League (and honestly, save Batman, Superman, Aquaman and Wonder Woman - I didn't know they had others) was not treated well.
Nor was Wonder Woman. Whedon "allegedly" said he'd make Gal Gadot look stupid on the screen when she pushed back on something. Whatever his reaction eventually got Warner Bros to not allow Whedon alone on the set with her for the rest of filming and reshoots.
But this is kind of the joke with these action hero stuff:  they all look ridiculous almost all of the time and people have no issue going no matter what garbage is released.  By all accounts, Wonder Woman already looked stupid in Wonder Woman 2.
This is an audience who'd pay to see the guy with the bow and arrow headline a movie, given the chance. Hell - they're letting Scarlet Johannsen's character have her own and all she does is kick. You cannot make these people look more stupid on screen than they already are. Where's the threat here?
The head of Warner Bros is taking a lot of heat too for their "we investigated and found no wrongdoing" but the stars are now talking.
Honestly, Whedon might never helm a thing again, but he is reportedly worth $100 million, so he probably doesn't care so much.
Song by: cast of Dr. Horrible's Sing-a-Long Blog
Posted by Blobby at 12:07 AM

Short man syndrome , small penis syndrome what makes these men with power and money want to spread , prejudice bullying and misogyny? Someone should whip his ass!

These little men bore me. Power and ego. Blech. I've spent my share of time being mean. It's not a nice place to live. It's about bitterness. You get hardened by some event, it gestates and then you find yourself taking it out on the rest of the world in little swipes - leaving the occasional claw mark. Grow up. Get over it and yourself. Have a cocktail and enjoy life, instead.

I don't know who this dude is. but he LOOKS like an asswipe!