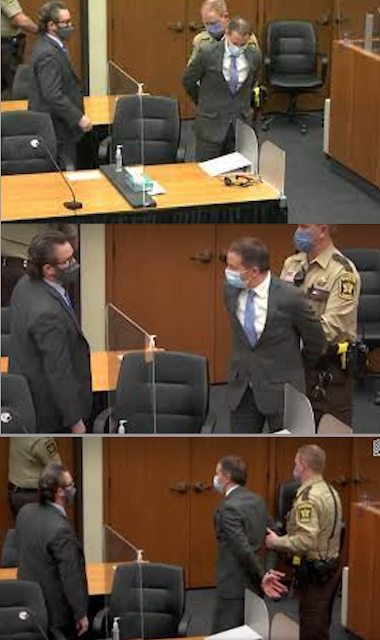 I got a text from CB, who lives in Minneapolis - home of the George Floyd murder - who told me the verdict was in.  Luckily, it was a crapfest work day, and close to the end of it, at that, so I couldn't fret too much that the jury wouldn't "do the right thing".  And I didn't hear when the verdict would be read. So I went about my day.
Morty is the one who texted me / us:

I am not excusing Chauvin for what he did - not just to Floyd, but to a nation. I have several thoughts on that last statement:
For not excusing him: at some point this bullshit of police literally getting away with every murder of every black person they've killed was going to have to come to an end at some point. One cop was not just not going to get away with it - they were also going to get it for every other cop who did.
This happened to be Chauvin.
Hopefully he was convicted on his own (de)merits and not those of the dozens of other cops who've killed hundreds of other black people who MIGHT have been guilty of nothing. I mean, he did kneel on a man's neck for 9+  minutes......on video. He easily got convicted on his own actions.
But it's important to remember, cops are not judge and jury - just executioner it seems.  Their job isn't to kill people being arrested. It's not. They're not even supposed to kill people guilty of crimes.
As for the nation comment:  It was a horrible, and yet enlightening, few months in 2020 - the murder and the protests.
It truly truly truly lets us expose this country's racism. I mean, it was somewhat well cloaked before BLOTUS, but the blinder came off when he took office.  But the degree to which it surfaced - meaning, it was always there - was just astounding.
No one wants to pick up the rock to see what's under it, but in a way, thank g-d someone did. It's ugly and needs to be dealt with. How is another question - to which I have no answer.
So, Derek Chauvin is going to prison. Possibly up to 40 years.  I'd be surprised if he makes it 40 days* before someone kneels on his neck for 9+ minutes.
*doubtful he'll be in the general population anytime soon, if ever, but...........tick tick tick.........
Song by: Bananarama
Posted by Blobby at 12:07 AM

“Some days are Diamonds,Some Days are stones” , I wish I had watched more of this, We will see at sentencing if justice has been served. If it makes 3 Cops anywhere in the US , hesitate, it’s a positive step. That’s a very sad statement!

chauvin got what he deserved! now let's take down the rest of the racist pigs out there!

I hope it leads to more justice