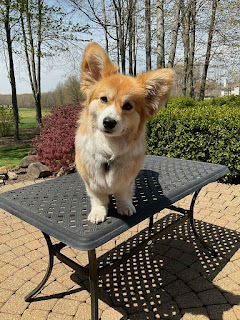 So last Saturday we did something that I cannot even recall was the last time.
We went to dinner at someone else's house!
It was my niece's 30th birthday. While you don't know her, I have a hard time seeing her as and adult, let alone 30. I still remember her 1st birthday vividly, or her as the 7-8 year old singing "Oops I Did It Again"......over and over and over.
Now she has a Ph.D and treating kids who have had traumatic home lives. I still cannot fathom how she does that, because at most, in my head, she's a teenager.
So anyways - my sister had dinner for her. She axed if we would be comfortable coming over. We all discussed, as it's kind of a group decision anymore.
It would just be the six of us. Everyone has been vaccinated. So we took a dive into the social pool, as it were.
In the last year, I've seen my sister three times:  once at my mother's stone setting, one at a dog park and over the December holidays, we stood out in her driveway for about 20 minutes catching up.
710 has seen my brother-in-law a few times, as their covid shots were at the same place at the same time.
And none of us as seen each other's "new" house. We've been here a year now. They've been in their new place about six months. So, out we trekked to their place.
First off - the house is really nice. They got something we didn't - a first floor master. Sure, I don't need it now, but.......tick tock........  And they have great outdoors space, though it was too cool for that.
It turns out, they all wanted to go out, but knew we would have turned that down. And we would have. So they go carry in - which was nice.
Two beers. Dinner - and too full for the dessert I brought.
Since it was semi-last minute (like 4-5 days notice) it turns out another side effect of Covid - getting a birthday cake made. Used to be 24 maybe 36 hours notice. Now it is 1-2 weeks!  So. I had to find alternative desserts.  It still worked out.
As I am (or can be) socially inept, I did start the visit with a pre-apology.  Out side of work I have not socialized with anyone. 710 hasn't even been to the office in 14 months, so he, even less so. While I can't say we were uncomfortable, we had the potential to be. I wasn't sure how we would act or interact.
Overall, it was fine. It was a little strange and we didn't stay a long long time. As it was their new house, we didn't bring Shep (and he and Bailey don't see eye to eye a lot of the time, as I recall).  So, for the second time in a year, he was left alone at home.
Again, since Covid, he's just never been without us*. Someone is ALWAYS home. So, save for daycare, so is he. He did fine. Nothing was destroyed.
One toe into the water.  Let's see how this goes.
* a white lie.  we did leave him for 90 minutes for my mother's stone setting last June.
Song by: Franz Ferdinand
Posted by Blobby at 12:07 AM

Yay, Yay,Yay! Don’t get the birthday cake scenario, but I’ll bet it wasn’t a white sheet cake with white buttercream frosting. I am super excited you have reconnected with your closest family. Sometimes life is good. And you still kept all the rules. Excellent! Shep will surprise you, I hope and be more independent! Happy re-entry!

"everyone has been vaxxed" - a good thing. and a bonus pix of bailey!