Song for a Good Son

Even I, Blobby the socially inept, know that one is not supposed to play favourites with your kids. But I suspect everyone does it.
I have adored every single pet I've ever had, or had the pleasure of knowing - except for one of Meredity's cats. Horrid creature, she. The cat, not Dith.
Today would have been Petey's 19th birthday. 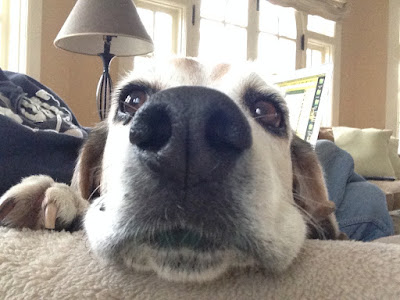 I fell in love with Petey when he was eight weeks old and belonged to my sister.  I loved all the dog she had, but Petey had a special place in my heart. I can't tell you why exactly - he just did.
9+ years later, we would take him in. Love him. Care for him. Nurse him. And love him some more.
710 says he was the perfect starter dog. And he was. Especially for 710 who never had one before. Don't get me wrong, for years, it was a lot of work tending to his conditions, but we wouldn't have had it any other way, as we knew no one would have cared for him more. I dare say, even my sister and her family.
Sure, I could have put 3-4 kids through college on what we spent on him, and it was still worth it.
Pete was as low key as could be, but ever adorable. He made us hound folks. I do love most dogs, but it is doubtful we'd own anything but a hound.
I believe Petey made us better people. While I don't really care for children all that much, I get that you put your kids first and make them the priority. We did that with Petey............and now Shep.
Yeah yeah - we love and loved the cats, and treat them with the same reverence, but........it's different and you know it.
So, I've been thinking about him lately, as we lost him around this time five years ago, followed closely by his birthday.
A few more parting shots. 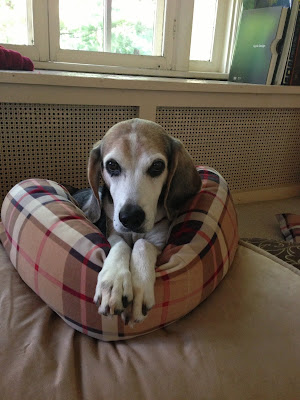 Cuteness abounds on his stacked beds. 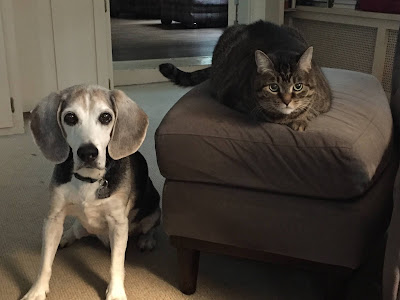 Partners in crime.
Sophie would loathe to admit it, but she loved Petey. If it weren't for his constant / violent sneezing and such, I think she would have slept next to him more than she did. But he was an old man, with old man attributes......and she has her limits of what she'll put up with.
Anyway, happy birthday to my boy.
Song by: the Bangles
Posted by Blobby at 12:07 AM

Many happy returns to Petey's spirit and your loving memory of him.

Yes, dogs and cats are very different, dogs being, of course, pack animals who have an inbuilt need for a leader to look up to and trust while cats will settle anywhere they can get food and the comfort and space to be left alone in, and not feel threatened.
I always feel that when a pet is difficult, or even 'horrid' as you say, some experience or someone has made them like that, carrying their memories along with them. If someone in the past was hostile they'll react as though every human is likewise. It wasn't long after my dear, departed Blackso [the First] left his home down the road and moved in with me I found out by accident that whenever I happened to roll up a newspaper he'd at least look at me in alarm or sometimes run and hide, so clearly signalling what he feared and what his previous owner used to do. It's little things like this which makes caring for them such a responsibility as well as finding them so endearing and fascinating, every single one being their own individual and unique selves, bless them all.

Memories are the fire in my soul to live another day sometimes! Mine was a big lab Named Butter or a Springer Spaniel named Kate. Of Course, I love the currents, but being sentimental fools is good. 👍👍👍

dear petey. you were good doggie daddies to him.