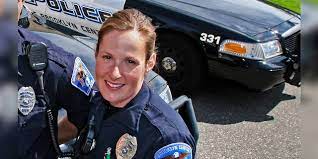 I'm not trying to see how many people can hate me with this post, but I'm not not trying to either.  And it's a little - or lottle - tongue in cheek.
....so it seems that women can do anything a man can - including gunning down an unarmed black man....in Minnesota.
Honestly, when I heard the news that a black man had been shot to death by the police, it never ever ever ever ever ever crossed my mind that it was a Charlie's Angels wanna be.  I was guilty of sexism on this count.
But really, why not a woman?  Hate. Fear. Racism.  If the BLOTUS years has taught us anything - and I'm not sure it has - it's that isms and phobias are not gender specific. It's almost like they instill these things in every police training program everywhere. But clearly the graduate level classes are held in Minnesota.
And of course a woman can shoot black men!!  You know, it was probably that time of the month with hormones running high. I think we can all be thankful she wasn't the president with the nuclear codes or access to 'the button'.
Still - gun vs taser.
Oh, those silly broads, they don't know the difference between a Phlillips head or a flat head screwdriver. They certainly can't be expected to remember a mild shocking device compared to a deadly bullet machine shooter thingy.
I suppose this is why they only get paid 73% of what male cops make.
That said, Kim Potter made great strides for female cops everywhere. She taught the entire Fraternal (sexist much, police guys?) Order of Police that women cops can do anything a man cop can do.
She's like the Elizabeth Cady Stanton of law enforcement........or something.  Yay Kim!?!
Song by: Helen Reddy
Posted by Blobby at 12:07 AM

It’s a very bad look, and a very bad feeling , every time a white cop kills a black person. Man or woman, it doesn’t take a penis or huge biceps to kill an unarmed man . I hang up on any Police Organization that calls my house Raising money. Why should saying she’s a stupid lying
Wh**e , bother you, she is .I think she’s fired but the black person is dead , there can never be enough said about how wrong this is!