Whatever 'Gets' You Through the Night 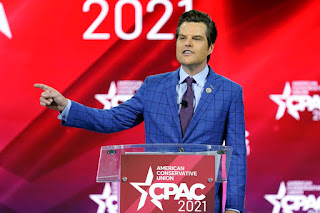 Let's face it, best description of Matt Gaetz is "creepy".

Honestly, look at this fucked up pic of him. Maybe someone tinted it, played with the exposure and saturation, but I'm guessing it's just his creepy self - down to the Burlington Coat Factory plaid suit, and the Billy Graham hair.

Of course, there is his "adopted" 19 year old son.

Of course, I don't know anyone has seen the adoption papers - much like BLOTUS' tax returns. And it's nicer to say that the kid is his adopted son, than say, that it's some kid he found that buttfucks him.

His brethren are kind of even defending him by regaling stories of how he was quick to show them picture / video on his phone of women he allegedly porked.  No doubt they were Canadian exchange student with whom he's already lost touch.

So now, his story is about a girl. And sex trafficking. Sorry, possible / alleged

A 38 year old with a 17 year old girl, isn't just more palatable to the GOP, it's in their fucking playbook - ask Roy Moore.......or BLOTUS (Jeffrey Epstein's good close friend!). Actually, 17 might be considered middle aged for that bunch.

Gaetz is such a fucking dweeb, he's actually telling people, "my dad is out there trying to catch these liars, and is wearing a wire!".  Well MENSA Matt, way to blow that cover!  (which you know the whole thing is a total lie.)

Personally, I love that it was William Barr's DOJ that opened this investigation. Not Biden's.

I get the interest in bringing this guy down, but it's fucking Florida. The trash rarely gets whiter or poorer than this. This is probably going nowhere, at the 17 yo will no doubt proudly be on some MTV teen mom show in 4.....3.....2........

I'd love to see this fucker serve time!

Hmmm... I see this costing Matt big time. Especially once we find out where all the cash for the prostitutes came from and his connection to the fake ID ring. Fascinating. If he wasn't SUCH a douchebag everybody would not be so gleeful about his downfall... but it's a lot like Jerry Falwell, Jr. Now, I'm waiting for tweedle dee and tweedle dumb to get snared... because, let's face it, the orange ogre's kids? They did not win the lottery when it came to brain DNA. I look forward to Matt's censure.

The Tax Collector of my County was named Ray Valdez, although a Republican, he served honorably for at least thirty years I know of. Then the son of a man who owns at least 100 dental offices primaries him because he needs a Job. They defeat the old Mr. Valdez , Greenberg fucks up a lot of stuff and is tossed out on his ear quickly. JRKroll is the new Tax Collector and Greenberg is in Jail and soon Gaetz can have all the dick of any color he deserves. This is how it rolls in Seminole County Florida , once every hundred years.Gaetz is panhandle Florida his Father owns several Lexus Dealerships and he gets whatever he wants including the Congressional seat bought for him by his father . As for your White Trash statement about Florida, there is plenty here and a lot of them are Crazy. The thing is 80% came here from Ohio, Michigan Jersey, New York ... The natives may be Redneck but the true natives anywhere were Native American .
Seminole County is my Home County , so I know these things also the County where George Zimmerman killed Trayvon Martin! But it’s rich and it’s mostly white and it takes no Grief from DeSantis ,something I’m not especially proud of , except the DeSantis part.But my house is paid for. Nothing personal here, Blobby , just describing it from the trenches!