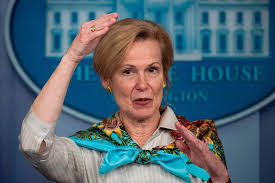 The picture here - and multiple others like it - seem to be saying, "I told lies that were thissssss big".

And she did.  Huge ones. And to what end?

To hear her tell it, had she been allowed to talk, at least 100,000 lives could have been saved from Covid.

Honey - you were "allowed" to talk. You weren't allowed to speak in the role you opted to take. The one you knew was a farce. You opted to be silent for your own gain.

Brix could have gone out in a fucking blaze of glory had she stood up in one of those White House sessions and lambasted the president and his team about their lack of performance, their lies, the misguided "science" behind everything they said.

But she kept your pie hole shut.

Sure, BLOTUS would have canned her sorry ass after speaking the truth. And oddly she wouldn't have to worry about not being heard. Every new org in the country (save Fox) would have clamoured to get interviews with her.

So, her Apology Tour '21 falls flat. She's more guilty on this than BLOTUS. That AMA should strip her of her license.

Sad that anyone needed money badly enough to allow. 565,,000 deaths. She and Trump are complicit. She should have fallen on her sword early and at least then could have salvaged her reputation. She deserves a rocketship to hell.

And she really needs to stop dressing like a Boy Scout

True... she had her hands tied... but then, why didn't she mention that at the time? You're not a hostage if you don't complain about being kidnapped.

"I'll stand up here and keep my mouth shut and you can look at my pretty scarves!" BITCH PLEASE!

She can fuck all the way off.