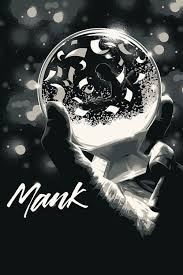 Movie-wise, we are on a roll.
Same day we saw the Eva Cassidy show, we hit up Netflix and watched Mank. I mean, you didn't actually think we were going to watch the Super Bowl, didya?
Herman Mankiewicz, that is.
He who wrote Citizen Kane. He, who along with Orson Wells, wanted tobring down William Randolph Hearst. You know, Patty's grandfather.
Mank is played by Sirius Black Gary Oldman, and while he inhabits the role, he might be 20-30 years too old for the actual part. I'm not sure most people know or care Mankiewicz' age and how / if it relates to the goings on of the subject (they don't).  I'm just saying they'd never have a woman in her 60s be allowed to try to pull of a 30-40 year old.
Mankiewicz becomes disenchanted with Hearst when he realizes the latter is using media to manipulate the outcome of the California gubernatorial race, trying to (and eventually succeeding) upset Upton Sinclair's chance at winning.
Some of the juxtaposition is nicely structured around a party at San Simeon while the guests talk of Hitler, brushing him off, yet then discuss the back room deals to control California's governmental process, all without the slightest irony.
Mankiewicz agrees to "anonymously" write the screenplay for Citizen Kane, though it's an open secret that it is done by his pen, and many try to dissuade him, including his brother (who would go on to write and direct All About Eve).
Director David Fincher (and written by his father, Jack) shoots Mank in black and white and uses some Wellsian / Kane visual homages.
The cast is good. Oldman does a fine job, though I feel like even I should have lung cancer by the time it's over, he smokes so frickin' much.  Amanda Seyfried does a great job as Marion Davis. Dickie Mountbatten (or the guy who played him in the Crown) is good as Hearst and Ben Kingsley's MUCH hotter son plays Irving Thalberg, who might be the actual true bad guy here......though they're all kind of bad guys.
The actor who plays Wells is spot on with the voice and looks like a young Orson.
I would say, after the fact I enjoyed the movie. During - it was a bit disjointed, a bit 'six months earlier.....' and tough to follow. Mank took time to find its groove.
If you have Netflix, it's not like it's costing you anymore to watch it.  How's that for a ringing endorsement?

Mad curious to see this though I don't have this 'Netflix' thingy - and am not really sure what it is. Anything about the 'Kane' film and I'm engrossed.

Way too Hearst for me, Gary Oldman has never held any appeal for me, his worst , a take on Nathaniel Hawthornes “ The Scarlet Letter” with Demi Moore! Ive never been able to watch Citizen Kane either! I suppose I just don’t want to watch it, Glad you’ve seen something novel, wish I were more into , things -“All about Eve “ what a winner, I love Bette Davis but this is my favorite!

I am interested in the history... but tend to steer away when Hollywood tries to present itself. There's always some type of reality lacking and I get tired of them patting themselves on the back while doing extremely awful things. You can't represent real life living in a world where none exists. Gary Oldman tends to chew the scenery, but I appreciate his enthusiasm. Trouble is, he typically commits to an idea and then pounds it into the floor. You know... I thought during the pandemic I would have the opportunity to catch up on Netflix, but the opposite is true. I don't watch. I read. Thanks for sharing this.

ben mankiewicz (a relative) does commentary on turner classic movies now. quite a hottie!