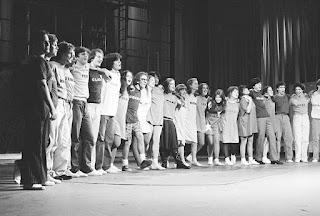 A cold, soon to be snowy night, we stayed in (duh! Covid!!) and after an episode or two of our on-going series we are trying to watch, we clicked on a movie.
Honestly, it was one I thought 710 would like, and I thought was more recent than 2016. It turns out I was only half right.
The movie, the Best Worst Thing That Could Have Happened had something for me too.  It had Sondheim for 710.  As you might have read in other musical posts, I like the man, I'm iffy on his music.
But I like process, especially in the arts. How something is made intrigues me. So, at least it had that. As it was the process of a Broadway musical - I'll admit, I struggled a bit.
The movie follows the creation, casting, demise and resurrection of the 1981 Sondheim musical Merrily We Roll Along.  No, I've never seen it, though I know one song from it (thank you, Carly Simon!).
The premise of a gradually backwards aging play, where one can see how now embittered adults started off as starry-eyed youths is a little of a tough sell.  If nothing else, Sondheim and Hal Prince were having youths play the adults as well as the youths, which was a challenge in itself.  With music. And dance.
And Jason Alexander. As a youth.

The filmmaker, who was casted as one of the three stars, got a lot of the footage from a scrapped ABC documentary on the musical, so there is much more than just the current day cast talking about what happened. You saw it happen......plus the current day cast talking about what happened.
If you look up at the pic, while they didn't do too many of the numbers - and never a complete one - you'd almost think we were seeing outtakes from the PBS show Zoom!.
Kids, being kids, can be annoying. Add to it, BROADWAY KIDS!  They're not that bad, but still a little showy, as I suppose one has to be in that biz.
Oddly, they did not focus too much music (praise be!) but what was heard was not memorable - at least to me. Maybe I don't have that Broadway musical ear (praise be!).  What I did see was the light at the end of the tunnel being a train - and for the life of me, I couldn't figure out how no one in the show didn't see that coming.
Apparently until opening night of previews when people literally walked out by the row did anyone go, "oh......hey".  As it is the revamped version lasted something like 16 performances before it shuttered on Broadway.  They actually recorded the cast album after the show closed.
I did enjoy some of the aspects of the what happened to the cast afterwards. Many took other directions, one was just George Costanza.
Allegedly Merrily has had many a revival and gone on to be a "beloved" show by theater folks. The original cast reunited for one (?) night performance a few years back - sold out in a heartbeat. Go figure. A cast almost no one has ever truly seen 20 odd years later clamouring to be seen.
The Best Worst Thing was an ok 90 minute distraction. It has a limited audience. Obvi.

Song by: the Mavericks
Posted by Blobby at 12:07 AM

I love just about everything about Stephen Sondheim and his Music. I get more and more out of it the number of times I hear it interpreted by different voices. Elaine Stritch, Patti Lupone , Bernadette Peters and a million others. I like almost anything Broadway or play. The right person playing the right character is magic. Looks like you are snowed in for a while. I can’t imagine Cleveland in the winter, must be hard!

I more admire Sondheim for his cleverness than feeling affection for his music. His lyrics are the best by far since Cole Porter and Larry Hart [what is it with gay men and strong lyrics?], regularly taking my breath away.
I did see 'Merrily' some 30 years ago in a one-off performance as part of an AIDS benefit, and am thirsty to see it again - in any form, so I'd take any chance to see this film.

Terrible musical. And yes, you are absolutely right... one good song, the rest? Fart noises. Theatre. Ick. Actors. Ick. Children. Ick. At the time, Sondheim could do no wrong... until he did. Several times in a row. Musical Theatre? It's a strange little cult. They love their failures almost more than their triumphs. Me? I'd rather take a power drill to the temple. To this day... just the worst dreck.