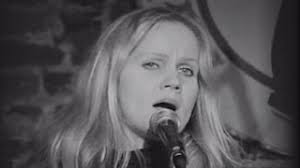 So a "movie" on YouTube is something new for us.  Normally, I use the service for music videos or comedy clips. Maybe a dog / cat kind of thing. Nothing longer than say, six minutes.
It was more of a documentary - an hour in total - but technically documentaries are movies, so, I'm letting this ride.
Eva Cassidy - One Night That Changed Everything.
The show chronicles two nights of the reluctant recording of her first solo disk - a live one at that - Live at Blues Ally.
While it was one night that might have changed everything, technically it was to two nights, but the first one had sound issues making the tape unusable.
10 months from the day of the recording, she'd be dead from melanoma.
While the movie doesn't dwell on Eva's death, as they barely mention it, she's is talked about in the past and what she'd be doing now. The movie truly covers the two nights she made this recording and how it launched what most likely been a career she never quite had the time to get off the ground.
The folks at hand were were band and how they worked with her - or didn't. They had to beg her to learn guitar to fill out the sound, and to practice or even warm up. She was just a natural when it came to singing, though she had little passion for having to interact with the audience - but mostly from being an introvert.
Cassidy's studio work - which was fairly limited, but someone still monetized that shit for all they could - was all released posthumously. For me, I never heard of her before an NPR piece on her back in early 1997. But I think a lot of people heard that All Things Considered (or was it Morning Edition?) show.
The movie showcases a number of songs - but I feel that her "Nightbird" was just amazing. She did it on the first night, but not the second, so it didn't make the record. As it turns out, she didn't want to release it at all, but too much money was already invested.
Perhaps Cassidy would have made it in life. I'm not quite sure. One of the record execs who turned her down signed Norah Jones (who is NOT all that) and Cassandra Wilson. With 20/20, he cannot fathom what caused him to pass on her. Maybe only in death and strong post-mortem album sales would he have even contemplated this in the first place.
The movie is on YouTube - so it's free. I think we only needed to screen one commercial mid-way through. A small price to pay for a big talent.

Not sure when I first heard her sing , was blown Away and then I said , Google , this doesn’t add up. So Sad when such a talent , is reticent to share her gift. Thank goodness, everything she did was captured. I’ll do a cliche pick. “Somewhere Over the Rainbow “ . I think I listened to that first before realizing she had died. I can really only judge that because, she was “magic” to me affter she was unavailable. I consider her talent a gift, for whatever reason and for however long we were given it! Excellent choice of topics!

Her version of Over The Rainbow is breathtakingly melancholy.

Strange... some work so hard and end up unknown. Eva was a reluctant star. And I am sure that record exec picked up on her attitude. Her reluctance. Life is so odd...