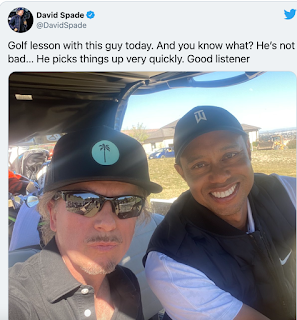 I'm just saying - if I were Tiger Woods and had to be stuck playing golf with David Spade, I'd probably run my car off the road, crash, tumble down an embankment and have emergency surgery just to ensure it wouldn't be stuck with him ever again.
I mean, the last time Woods crashed his car, Spade probably wasn't involved (I said "probably") but at least this time, his (now ex) wife probably wasn't beating the wrecked car (and driver?) with a golf club.
I said "probably".
Oh - if you haven't figured it out, I had zilch to write about today.
I might have been better just to post that. But I didn't.
On another note, whatever did happen to Paula Cole. I guess I have a wiki search coming my way.
Song by: Paula Cole
Posted by Blobby at 12:07 AM

Email ThisBlogThis!Share to TwitterShare to FacebookShare to Pinterest
Labels: Stuff

7a...drunk, high, fell asleep, texting...plays golf with dumpyhead...his 15 seconds of fame were up long ago.

It's headlines news here this morning, as if Covid wasn't important enough. But oh, how I DO hope that such a fate doesn't meet other golf cheaters.....sorry, I mean golf players.

Maybe it’s a lesson that bad stuff happens to even the richest. Tigers greatest punishment will be his unfulfilled legacy. So much promise, supposed to pass Nicklaus and Palmer. Sadly, too Serena Williams is probably done. I wish their money was redistributed to help the masses , but I wish they could have had their fame. As long as neither dies and a false legacy of greatness is created, like happens with rock stars , I’m good!

LOL... Love Paula Cole... she simply became herself. Her third (?) big single I Believe in Love was my favorite. Great dance mix. As for Tiger? Ummm. Dude needs to get a car service. Period. Pretty sure he can afford it.