In my on-going un-scheduled (read: when I have nothing planned or anything to write about) limited (?) blog series about shit we are watching - which is totally different than movies we are taking in.

These are (usually) going to be series, though I suppose there could be one-off programs. It's hard to tell.

Our Sunday Zoom / Drinking call invariably at least touches on what we are watching - and everyone has slightly different streaming service package, so some suggested things are not an option to us.

We are stuck with HBO, Prime and Netflix.  Maybe AppleTV? When we moved, we got a free 9 months - which seemed random - of Disney+.  We watched one thing: Hamilton.  It seemed to be a steep price to continue that trial just to see Pochahontas (g-d, I hope I spelled that correctly.  John Smith would have my head!) whenever we wanted.  Sure, we could have had multiple viewing of the Computer Wore Tennis Shoes, but really........at what cost?

So, we watched the limited Netflix series, Pretend it's a City, starring Fran Leibowitz, Martin Scorsese and some usually unseen guy sitting at the same table, no doubt the one actually asking questions that you never hear. 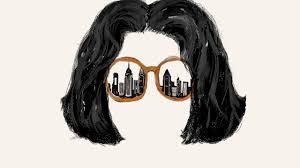 Pretend isn't too far off an HBO show Fran and Marty did back 11 years ago !!!!!  Honestly, had I been asked, I would bet the neighbors kids on it maybe being 3-4 years old.....tops.

HBO, to me, is all about the repeated showings, yet I never saw Public Speaking other than its debut. On their 134 HBO version, I never came across it again (that's what she said) and it wasn't in their on-demand menu.  So a decade plus later, Netflix somewhat redoes it in an 8 (?) part series.

Leibowitz, as always, is great. It sounds like she talks and talks and talks - and she does, but mostly through editing. She seemingly talks about random things, but go back to the unseen man to whom she's talking (it's rarely to Scorsese, who sits next to her most of the time).

Good thing, I'm not sure if I would have known Fran was funny if it weren't for Martin. The sarcasm was implied.

I liked the series and it went by quickly. Besides the laughing, one thing bugged me - slightly - about the series. I guess I could look it up, but often there were clips of different celebrities interviewing her in a studio - the same studio for some show. Maybe cable access?.  Alec Baldwin - clearly from years and years ago. Spike Lee. Olivia Wilde. ...and maybe someone else?

Pretend moves quickly and it's not a huge time investment. And I mean, there's not enough Fran on TV, even when she plays an arraignment judge on Law & Order.

I want Fran, Sarah Silverman and scientology babe Jeanine Garofalo to sit down and and yak it out, no editing. Just throw them a topic, like a piece of meat, and see what happens. My only fear would be that Fran would sit back and observe, rather than converse. Just a hunch. Hey... make this happen.

And it doesn't matter if you can't spell, you write. Spelling is what editors are for.