In my on-going un-scheduled (read: when I have nothing planned or anything to write about) limited (?) blog series about shit we are watching - which is totally different than movies we are taking in.
These are (usually) going to be series, though I suppose there could be one-off programs. It's hard to tell.
While of course, we stumble over things in the Netflix menu etc, usually we pick up on thing via word of mouth. I'm always going to forgo the paranormal series, as those just no longer interest me.
We just finished Schitt's Creek. 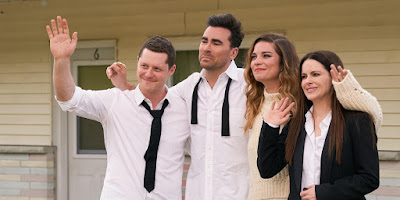 I know what you're saying - and thinking:  "but it's been on for six years....."
You're telling me nothing I don't know. We did see the first episode of sesason one six years ago, but honestly, it was not good and the idea of spending 30 minutes with Chris Elliot seemed..............tiresome.  And that was my 'nice' version.
For a long time, I was unswayed by folks who said, "you havvvvvvvve to see it".  After my resounding loss to Mike during 2020 Emmys, where the Crick took all top awards (and whom Mike all successfully selected), I thought - well..............maybe we should try again. And we did at the beginning of the year.
If you can get past Elliot - and if I can (to a degree), you can - the show is quite good. I'm just not 100% sure Elliot is acting. I'm not 100% sure Dan Levy is either - if his SNL appearance was any indication of his 'range'.
Of course, I've loved Eugene Levy and Catherine O'Hara since I was a high school lad watching SCTV. Then onto all the Christopher Guest movies. O'Hara is brilliant in just about anything. Her Moira was good, though more than once she veered into Lola Heatherton territory.  Levy was Levy.
What, on the surface, could have been construed as a vapid Paris Hilton type of persona, Annie Murphy's Alexis was determined, smart, savvy and caring. And she grows - something you don't normally see in sitcoms. Her voice could easily have the casual viewer thinking otherwise, but she might be THE star of the show when it comes down to it.
She and Stevie.  Stevie is totally underrated.
More importantly, Schitt's Creek is a show and town where people truly live and let live. David's possible bi-sexuality and gayness are barely topics of conversation and there are no teachable moments, because no one in town, or nearby Elmdale, care.
A storyline about Jake being a guy that is seeing both Stevie and David is great - and no one is truly hung up on it. The one would be 'after school special' moment is a newly arrived high school kid who might be gay and Joecyln gets David to engage him - and of course, it backfires beautifully.
Of course, there is a storyline about love - and it just happens to be between two men. No one cares, even Patrick's parent who didn't know he was gay.  Their first date and first kiss is just a wonderful episode
The lack of any homophobia puts Creek on its own plane.
Only a few episodes fell into farce material - which I don't enjoy as it is so trite and usually not well done.
I like the townsfolk. I like the storylines. You gotta love Catherine O'Hara.
I might not be one of the people who say you 'havvvvvve to watch it", but I think if you can get past the first few episodes, Schitt's Creek is something you'd enjoy.
Song by: Bruce Springsteen
Posted by Blobby at 12:07 AM

Always good to see Catherine OHara and Eugene Levy get critical or comedic acclaim. I’m not a trendy watcher of TV. The name Schitts Creek turned me off from day one, just silly or something. I am always glad for their success , the ensemble, but to see Eugene act next to his son , there is a big difference. We have Covid Vaccine #1 today, have been all consumed with that , as my soon to be 89 year old mother is all consumed with that. Wish me luck! Thanks for the fish!

I was in the same boat as you. I watched, maybe the first six episodes, and so disliked Chris Elliot that I gave up. Then everyone started saying how great the show is/was. Same thing with "Grace & Frankie" which I'm now restarting. Maybe when we're down with G&F we'll give "Schitt's Creek" another try.

Adore the series. Catherine O'Hara is a treasure. I loved how they handled the gay relationship. And Alexis, ending up alone and moving on, perfect. The one thing they didn't do was have Alexis create a campaign on-line for the release of the Crow movie. But small complaint. If you watched the little documentary on the filming of the final season, you can't help but get what this show meant to these actors. The actress who plays Stevie? I want to adopt her. It was an amazing series... very curious what is next. And Dan Levy? Yeah, he may be a one-note Johnny (hee hee), but it is an interesting one. A softer version of the mean queen with standards... believable, because every line out of his mouth is not a packaged aplomb bomb.

I am saving the last season for a rainy day when I need some hope.