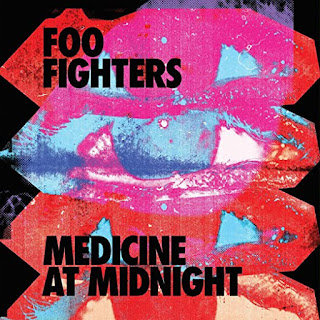 I am underwhelmed with the Foo Fighters new disk, Medicine at Midnight.

I love Dave Grohl as a musician and human being. He's seems genuinely nice and funny - and talented, but Medicine is lacking something. Possibly a lot of somethings.

Clocking in at only nine songs and 39 minutes - which seems chintzy - the band does not make best use of this limited time with the best resources or songs.

A year or so ago, Grohl called it their Bowie Let's Dance disk. I guess someone should have asked more about what that meant. It has little Bowie-esque qualities, lesser Nile Rodgers qualities and the songs will never be as memorable as Dance.

Medicine starts off with a pretty horrible "Making a Fire" with it's "nah-nah-nahnahnahnah-nah" chorus. WTF were they thinking? It is possible it might have been good without it, but it is so incredibly distracting, you'll never know.

I can't believe I'm the only one who thinks "Waiting on a War" has more than just a tad of similarity to something like "Best of You". I mean, I love the original, but it's kind of been done in terms of tone, not lyrics.

I'll kind of give the Foos a little credit for "Cloudspotter".  I mean, I don't know what it is or supposed to be, but it's different - and not typical. At least if they're stretching a bit, make it interesting (or at least different), which most of this disk does not have.   ....and "Chasing Birds"?  Just. No.

The title track, there are sections that have a little Bowie influence. Ditto with "Shame Shame".

For more typical FF, I guess, "Holding Poison" and "Love Dies Young" (which starts like Heart's "Barracuda"-lite) and they're fairly generic. I mean, they're not great Foo Fighter songs, but I expect more from Grohl & Co.

Maybe next time. I'd say if you're considering Medicine at Midnight, sample heavily before plunking down the $$.

I have always admired the Foo Fighter's work ethic. And they have delivered some rather interesting, if standard fare in the past. It's always telling when a band tries to break out of their usual mold and flail. Ah, well... every truly great performer has a failed concept in their history. Great review. Thanks for sharing.