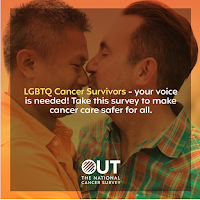 Today is National Cancer Day.
Whoo-hoo?
Normally, these days just pass me by without a notice. However, a few weeks back, I was "asked" to participate in a survey regarding LGBTQ Cancer Survivors.
I mean, you're getting pretty specific when you start whittling down homos or gender identify folks who just didn't have cancer, but survived it. You gotta figure that N is pretty small - and smaller yet, the folks who would actually be found and take the survey.
I took the survey.
It was longer than I expected, but for the most part the subject matters were a lot what I expected.
The survey touched a lot on respect and comfort with your healthcare provider, the nurses, the staff. I answered according to my perspective - or perceived perspective. Surgeons are surgeons and rarely known for their bedside manner, so it was hard to tell if he was dismissive of everyone, or just the gay me.  The Fellow in the hospital and at my post-op appointment - while hot as hell, he was kind of dick to me while taking out my 37 surgical staples. I was a dick back, so I felt even.
None of this is (was) necessarily because I am (was?) gay. They did know it, but I don't know if that was the cause of their dickiness (it's a word!).
It covered one's support system outside of the medical treatment. Friends, families, resources one might have had or needed or wanted - and what helped, what didn't.
Taking the survey couldn't hurt. I figured if it helped anyone going through cancer treatments who are queer - then it was small potatoes on my time, for something that might be big ones for them.
Song by: twenty one pilots
Posted by Blobby at 12:07 AM

Email ThisBlogThis!Share to TwitterShare to FacebookShare to Pinterest
Labels: Cancer;

Congratulations to all cancer survivors Gay, Straight and Otherwise . Also, much thanks to Doctors and nurses who treat you like a precious gem instead of a number. Your recent urologist was way above average , even in pandemic times my PCP and my RN hug me , my father died of cancer as did my grandmother , both with stellar care. It’s such an insidious disease. Happy today for Blobby and Anne Marie!🌞🌞👍♥️🤡🎈😜

I have horror stories about my hospital stays. And I was an easy patient. Never complained. But every once in a while I would get a meanie... sticking the IV in my hand when my veins were right out there to see. Abandoning me in a wheel chair in the basement of the hospital with no blanket in a cold hallway, knowing I did not have the strength to walk or roll myself anywhere. A bone marrow procedure that I'd had in the past, and yes, they always hurt... but then I got a sadist who just let it go on and on and on... while he yelled at me. It was some weird shit. But for the most part... people were cool. Nurses were sweet. Glad those days are behind me. Congrats on surviving. We all have to keep in mind what was in order to appreciate what is.