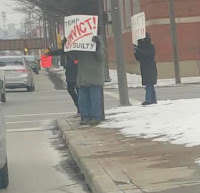 That's how long it's been since my last post about politics, and it was about a poet, at that. So, 20 days, since the inauguration.  That might possibly be a record in the last four years of this blog.

I have no words of wisdom about this impeachment trial. Thoughts, yes.  Wisdom, no.

As you might have guessed, I've tried to read or listen to as little as possible. And I've watched zero of the proceedings, live or in recap. I don't see the point.

A. We know what happened.

B. The House and Senate knows what happened. The Republican side doesn't care.

I mean, that's it in a nutshell, correct?

This total bullshit after, 'can't convict after he's out of office' is kind of on #moscowmitch, no? He is the one who delayed the trial until after BLOTUS was gone.

So, this is an exercise in futility.

From all accounts, the prosecutors (whomever they are - from/for the House? the Senate?) did a whiz-bang job.  The semi-newly hired BLOTUS lawyers? Not so much.

Seriously, if you don't follow Luke Skywalker on Twitter, you should. He has tons of money, so he doesn't have to work a lot and has done little but troll BLOTUS the last four years.

And as much as I want BLOTUS removed and not able to run again (though he will more likely be dead in four years), the conviction is not for that. Send the fucking signal to the next (current) group of asswipes, that this isn't tolerated.

Mind you, they're asswipes, so they either won't get the message or think it doesn't apply to them, so......again, this entire things is a waste.

I agree with you, It’s beyond my understanding! It’s revolting. It’s reality! Nothing else need be said!

Cruz, Hawley... what a joke. They open their mouths and poo falls out. I want them all gone. Talk about close-minded. Sadly, there is so little of value behind those doors. I am glad we are going through the motions with this... but the outrage was not there when it happened, it's not going to be riled up now. Repugs have done nothing but worked their spin magic... initially shocked and now back to where they were before the insurrection. McCarthy is a prime example... he's been all over the board on where he stands about the whole thing and the orange ogre's culpability. Well, at least we had this dance... let the band play on.

As if it hasn't been aggravating enough, I came across this read early this morning. This is some shit, isn't it? Effing ridiculous.