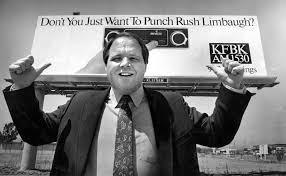 Good. Fucking. Riddance.
Karma baby.
If you hate that fucking much on people and spread lie after lie after lie, even if it is just for ratings, you deserve to die of terminal cancer.
There. I said it.
Yes, they were lies, but his listeners believed the shit out of them. I think the dickknob knew they were lies, but you know if you say it enough even you start to believe it?  That was this. I think.
Of course, who could blame him.....to a degree? A convicted drug addict who did no jail time. How could he possibly relate to someone who had the exact same crime, but who wasn't white and got put in the pokie with no access to good legal support or money for bail.   ......so they rotted.
Instead of pointing out inequities in sentencing guidelines or the justice system, he just based shit on race. And gender. And sexuality. If you weren't a white straight male - you weren't good enough. Period.
Anyway - I know a year or so ago, I assumed Rush was lying about his terminal diagnosis and he'd have some 'miracle' recovery.  I was wrong - and glad I was.
I hope his journey from that diagnosis to his big dirt nap was a painful one. A horribly horribly painful one.
Yes - I'm not one of those who are like: "oh, we should have compassion for those who are suffering.....even if it's Rush".    Nooooooooooo.    Nooooooooo.  He had no compassion and deserves none.
Deserved. Past tense.
Just like Rush.
I liken Rush's death to Jerry Falwell (where I still remember where I was when I got a text about his death!).  The idea of pissing and / or dancing on his / their grave still invigorates me.
Granted, the death of BLOTUS will be like that times 2,081,993,872,124. But until that day, I'll take this as a placeholder.
See you in hell, Rush.
Song by: 10,000 Maniacs
Posted by Blobby at 12:07 AM

Oh Blobby, you’d give your last nickel to help an animal , and love your family , have a job that helps people. Rush, will be in the most volcanic of hell’s, but you not so much. I said so much truth about this phlegm of a person yesterday, I think I I’ll stop. Rush Limbaugh is dead. Good! My mother and I got Pfizer #1 yesterday, go back March 10 for #2. I feel blessed and a tiny bit sore. I hope the floodgates open soon for everyone!

A bit of human poison gone from the earth. Something deep inside me keeps me from saying what I really feel, a restriction you don't seem to have, sometimes we need to be bold and say what needs to be said.

the fat drug-addicted racist sexist homophobic bastard cannot spew his vile shit any more. so let's take a number and #restinpiss on his grave!

When you see #restinpiss trending on Twitter and you don't even have to click on it to know who it's about.

Lungs. They powered his every word. They powered his divisive, racist, misogynistic, hateful, homophobic, elitist, power-mad rhetoric. So, how fitting that they should turn on him and rot him from the inside out...? Is that ironic? Or merely... justice.