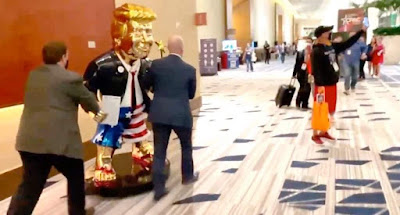 While I am not a biblical scholar (I know, right???) I learned a few things whilst growing up that are religious themed.
I'm 99.1% sure that Exodus is pretty clear on false idols and false gods:  they're bad!
Honestly, it's like Bible 101. Maybe even remedial 050.
For fuck sake, the need to banish false idols pretty much IS the reason for the Ten Commandments.
So, I don't even see it as irony that a conservative / religious political convention rolls a larger than life sized golden "idol" of BLOTUS into its annual get-together.
They are so far beyond irony, and into depravity, and so deep into their QAnon wooded area, that there is no forest for the trees. To point any of this out is, ironically enough, the sacrilege.
And that whole, "don't desecrate the flag" thingy?  Don't take a knee in front of it, but by all fucking means, make them into shorts for a morbidly obese EX , twice impeached, "president" statue.
Of course, this group was well fucked up before BLOTUS ever opted to run for the office. This place is like ComicCon (well, I'm guessing) where just about anyone can have a "panel".  It's the veritable throw it all against the wall and see what sticks - just as long as no homos, blacks and only women named "Karen" are allowed in.
Honestly, if there were one place to firebomb - not that I'm advocating it - that would be THE place. Because, seriously, I can't keep waiting for the locust, bloody rivers, frogs and the angel of death. I just need someone with a good old fashioned accelerant and match.
I suppose it would do no good - as you know, the Devil / fire thing. I do love that someone went around posting these all weekend long though.
It was probably BLOTUS Jr.
Song by: Kris Kristofferson
Posted by Blobby at 12:07 AM

“All That Glitters, Is not Gold”!

The statue was made in Mexico! It's a piñata full of poo?

CPAC is a joke. Ted Cruz's little monologue was one for the ages. What a tool.

Sadly, there was no smiting... so that whole god does not exist thing? There's a little more weight to it now.

it's fiberglass; hope someone got some fiberglass under their skin while creating this ugly beast.

I've found a great peace in not engaging with or following the "news" about our former President and his family. I can't speak for others, but all this reporting about CPAC, Trump and others isn't really news in the sense that it tells me something I didn't know previously that helps change my thinking. So I've concluded such "news" is really just a ratings grab by news networks. Oddly, reading about this sort of thing is less upsetting (probably because I can scan or skip it entirely).

If you find yourself getting upset watching this sort of news, then cut it out of your life. You may be surprised how much time you get back and how much it improves your general disposition. Although I have to admit I did get a chuckle reading your post about Republicans prostating themselves in front of what looks like a Vegas-esque gold statue of Trump done by a first year art student.

Bos - totally get your vibe. I had really cut so much new out in the last years, but especially since the election. I still find it dangerous to NOT know - at least on some level. That is how these folks tend to get away with shit, counting on lack of education and complacency. How else does one explain the constant reelection of McConnell?

ugh to the lot of them.