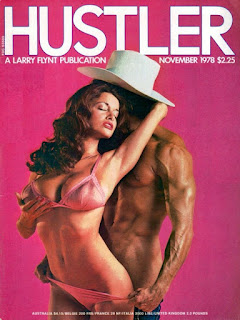 I suppose (?) it should be noted that Larry Flynt died a few weeks back.

Regardless that he brought Woody Harrelson and Courtney Love notoriety for the movie the People vs Larry Flynt, the events that made the movie are still important.

I still believe in the first amendment - regardless of how the last half decade has twisted that term into knots upon knots in my stomach.

But that is not what today is about.

After Flynt died, I vividly remembered the one and only issue of Hustler I ever saw - and I was all of 15.

Now 15 back then is nothing to 15 now, where this stuff is currently available much easier. I wasn't a naive 15 year old, just not a worldly one either.

So much so that my friends and I called another adult magazine, O.U.I., as we didn't know the word Oui.

Before you figure into that, I had taken French before I was 15. I saw Hustler at 15, I had seen other friend's father's magazine collections for years before. But those were girls who liked hayrides walks in the park, a gentle rain, and the likes.  Gauzed and airbrushed women even back then.

But what it did offer, the others didn't - as you can see there is man on this cover. The first nekkid man Blobby would see in print.  It would not be my last. So that I  might see more, I stole this from the father of one of my friends.

I'd say he presented as 'full', but hardly hard.

Now that I think back on it, I'm about 89.4% sure he / they never showed it face, which may have made it more intriguing. It's Hustler. It wasn't supposed to be about the dudes.

Looking back on this - the now old Blobby isn't really turned on by the guy on the cover (and the spread on which he's second banana) the way 15 yo Blobby was. But again.......he was the first.  And not the last - though the last for Hustler.

Any and all male nudity centers for me around the fourth grade, the first time I ever saw significant numbers of adult naked males. It was a Squad/ Platoon of National Guard come to use our gym showers, after we fourth graders were already in the spray. Don’t know how nine year olds and 20 somethings got thrown together but my eyes were opened to what my life would be from then on. Hustler was always a favorite of mine , because it showed men and they were fluffed and chubbed. I even remember a young and very thin Ron Jeremy as my favorite issue . I’ve seen just about everything from Vietnam Polaroids to the slickest produced Michael Lucas and KristenBjorn. I think what made steam come out of my ears most was the Novel “ Fanny Hill”and Penthouse Forum .

My first er...exposure...to porn was my freshman year in college (yes, I was I guess, a late bloomer). It was a Playgirl (supposedly AFTER they started featuring guys fully erect) that I bought at a bookstore just off campus. I remember I couldn't even get it back to my dorm room fast enough; I had to stop at the Architecture building to whack off in one of the bathrooms. And wouldn't you know it, some guy came in and took the stall next to mine to use the facility as intended - and I dropped the magazine. Unfortunately that did not lead to an under stall tryst; those were still a few years in my future.

Van McCoy... perfect. Oh, this brings back memories. I would babysit and after the kids were asleep, I would hunt for all the porn. One family? I didn't have to hunt... it was there with McCalls and People in a magazine rack in the living room! I loved Penthouse and Penthouse letters. And I adored Hustler. Peen was what I was hunting. Oh, and those Happy Hooker books. Did I mention I used to babysit for the town's leading lady of the evening? Anita. I used to clean her house. She was such a mess. But she had all the Happy Hooker books. Ah, good times.