Two Shots of Happy, One Shot of Sad 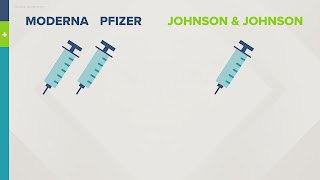 I don't know from elsewhere in the States or the world, but here in Ohio, things are finally kind of moving in terms of getting Covid vaccinated.

We seemed forever stuck on vaccinating 70 and up. That was mostly due to lack of vaccine - not an inordinate number of senior citizens.......though to be honest, I haven't done the research on that.

710, my sister and brother-in-law got their first shot a week ago.  "My" posse are starting to get them this week.

One Cleveburgh mega station is prepared to do 8,000 shots per day. And thankfully, they are doing it in a part of town that is underserved for minorities and people of colour. It's right at a major bus changing station and the city will also provide ride vouchers for people to get there. We are finally doing something right.

My place of work has given out close to 50,000 vaccines.  50,000 patients. More vaccines.......because most of them have been two shots. We finally got the J&J (one shot) in the last week, but the majority are still Pfizer.

But I'm realizing the new intro line to people isn't "hey baby, what's your sign", it's "hey baby, which vaccine did you get?".

Discussion now centers on one or two shots?  If two shots (and one, I suppose - though know one I know has gotten the J&J one), what was the side effects for each dose and the severity of each.  The humble brag that comes with the "I had no issues at all" - the people who hate them behind their back.  I kid.

I'm amused at the vaccine shopping. I never ask for which brand are they hoping. Is it so they only take one shot that is 73% effective, or do they want the 94% one - which requires two? Without knowing - or asking - I remind them that flu shots are about 35% effective, so take what you are offered.

710 and I are a little excited. At some point in a little over a month we can see my sister and her family. And hopefully we can get together with our Columbus friends.   .....and some Cleveland ones.

I still foresee being safe, but with a little bit of comfort knowing we've all been vaccinated.

I’m loving this post . I am so thankful about the bus vouchers and the demographic of Which you spoke. I’m excited about family. We fell into our vaccine. I was told M and we got P. P was my first choice, for us it has had all the side effects of M which is more notorious. I am so greatful to be done and for health professionals everywhere , who seem to be an endless fountain of giving. I’d like to feel safe again buying fertilizer for my yard at Lowe’s. I am still gonna wear a mask while I see how this shakes out as we all should. For us March 24th will be the first day for baby steps back towards normal.

Hee hee... it is fun to anticipate this all turning around. I was rather shocked that NBC News devoted most of their evening news broadcast to celebrating the defeat of Covid. I thought, huh? This ain't over. I know states are relaxing or eliminating restrictions, but let's be honest. We still need to be careful until herd immunity, via vaccines, is achieved. I am one shot in. My 'due date' - that's what I call it, because it is a kind of rebirth - is April 21st. Then I get to circulate freely - but I will wear a mask in stores and continue many of my recently adopted safety protocols. I don't trust mother nature. She keeps trying to kill us... and she will one day succeed (and rightly so), but I do plan on making it difficult for her. Thanks for sharing this. Wishing you the best.

My partner and my mom get their M#2 on Tuesday. I'm so very happy about this. She's 84, he's 65. I'm so far down the list that I don't know when I'll get a dose. Until then, double-masks for me and drowning in hand sanitizer.

I'm happy to hear that in The Land of Cleve things are going well and that the city is helping those who need help. Small victories.

I got my first P shot last friday; #2 scheduled for 4/2. our county is well organized, but we need more vax doses. and I ain't giving up on masks & social distancing after I get shot #2; the MAGAts are still amongst us.

Just got my first today at lunchtime. Only possible foreseeable side effect of the Moderna vaccination might be that your singing might improve thanks to Miss Dolly Parton's generous gift to the research effort. Of course, I will never know Since I was offered and joyfully accepted the Pfizer vaccination.

I get my first tomorrow; I forget what sort it is.
I think any is better than none.