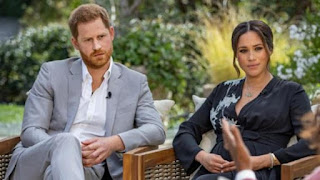 I'm not a royal watcher - or carer  abouter (though for full disclosure, I did see the Queen and the Crown and a Lion in Winter) - but I got nothing else to write about (thanks BLOTUS!) and doubtful I could be worse at critiquing Harry & Megan's interview with OP-RAHHHH!!!!!!!!!  (you have to say it like any half-assed amateur Oprah impersonator would do......I'm looking at you Maya Rudolph).
For the record, we did not go out of our way to watch this. We knew about it, but not when, where or how. We stumbled upon it - and it turns out there wasn't much readily available to watch that didn't mean starting a new series or something. We never planned to watch the entire two hours.
Plans change.
I'll start with this:  Megan is well spoken. And while you can say "welllllll......she's an actress", I've seen Suits. No one on that show is that good of an actor. Mind you, I've only seen it was one episode and it was on a plane, but I stand by my answer.
While the entire things does come off a little as "tattling on the royals", I think the bigger takeaway was: if half of what her perception is, is true, then the Firm is more fucked up than the Queen, the Crown and the Lion in Winter infers.
I see little to gain in either Megan or Harry speaking. I guess it gives attention to their podcast (yes, it's official - everyone has one, but I) and whatever they're going to be doing on Netflix (again, who doesn't have a streaming show........but I?).
I mean, Megan has the least to gain, except sympathy. Harry might get his family back - to a degree, but I think it's a write-off.
The racism, if true, they are both best away from that clan. And while they were nice enough not to ruin someone's life by saying who was THE biggest racist, you just know it was Camilla.  Or Andrew. Anything to change the narrative of his raping young girls with Jeffrey Epestein.
I will say, the suicidal thoughts was unexpected. I get the depression and the weirdness her life took. That there was no protocol (allegedly) for coming into the Firm. How could one ever adjust to that life?
Now, I will say there was a huge missed opportunity here with Megan. Yes, depression set in after marrying, but the suicidal thoughts were after her baby was born.  And yet not one question on post partum depression.
That could have been in conjunction with her existing depression, or it could have morphed it to something else. But Oprah being a barren 103 year old, she wouldn't know about such things. Still, if she was unallowed to seek any mental health treatment, that just adds insult to injury. Fleeing would have been the best case.
I was much less impressed by Harry. Not just his style, but coming across as anything but sympathetic. Not that he should be. I say, if your father stops taking your calls  - good riddance. I have a harder time about you being cut off financially.
It is a fucked up life anyway you look at it. It's probably not bad they got out - but unless you're looking to change the monarchy - as if - why waste the energy?
Song by: Lorde
Posted by Blobby at 12:07 AM

Meghan , is always the victim . Of her family of the Royals, of life. She always comes out smelling like a Rose. Nothing to gain. Then why air your issues to America’s most famous talk show host , who is also in a joint , venture with Harry in business, and whose fame is slipping or was slipping until Sunday Night . Meghan and Harry have contracts with Spotify 18 million, and Netflix 125-150 million . So cementing a brand is important here . Before I say more , I should say I don’t like Meghan , she is the perpetual victim . Harry tried to compare her situation to his mothers , in my mind big Mistake , Meghan will never be Diana. The race card has been dropped at least three times . The Queen isn’t the racist here , I am thinking Charles or Camilla might be brash enough to say out loud their-grand child might not be lily white. Genetics would determine this and it was in poor taste . This is big money and the most famous monarchy in the world. Your father in law paid 66,000 dollars for the dress you wore to announce your engagement. Your wedding cost the Uk about 40 million in security . She knew what she was gettting into , she was told by multiple people . I think the most amusing part to me was that she cried over an argument with Kate Middleton. They had this discussion because Kate wanted her child wearing tights under a bridesmaids dress ,so her ass wouldn’t show if caught in a photo, standard procedure at all other weddings. I won’t go on . But there’s no free Lunch, now Harry with Meghan tightly gripping his balls will provide it. Off to therapy with them both, instead of off with their heads.

Just for the record, I also don't have a podcast - I don't know what one of them looks like. I don't have a Netflix either, likewise ignorant of their nature.

I don't have a podcast nor a streaming service.

from what I read about the interview, the monarchy is full of racists. now H&M need to move on with their independent lives and fuck the firm!

It is very very upsetting to hear/read the comments about our Royal Family being racist. They certainly are not. I think it would be a good idea for people to do some research on the Queen and her work with the Commonwealth.
I feel Meghan is a controlling person who has done to Harry what some coercive abusive partners do, remove their chosen spouse from his or her family, mentally, emotionally and physically. Time will tell.
Did anyone watch the wedding and Prince Charles escorting Doria Ragland so kindly?
It must be devastating for Harry's family (not The Firm!!!) to see their loved one one being manipulated and taken away. How much he has lost! His army life that he loved, his family closeness, his charity work and his pre-Meghan reputation. And what his wife has gained! She has celebrity beyond measure and will never have to worry about money again. Not to mention that little Archie will be a Prince and his sister will be a Princess when their grandfather becomes King, that is the truth of it.
As someone who has watched this from the beginning (with joy) to now (with heartbreak) there are a Lot of inconsistencies in in what Meghan is saying in the interview and what was said before the wedding.
And to do this now, the timing is questionable, there is no consideration for others at all. What his grandparents are going through with health and age/pandemic etc is appalling. I think they should lose their title of Duke and Duchess, they don't deserve it. I hope Harry is given a way back when he realises the truth.

So... NBC NEWS tonight called this... this A CRISIS. Not the fact that black transgender women are being killed right and left and nobody - not the media, not the police - seem to give an F. So bad that they have to take out billboards in Georgia to call attention to it. Now... NBC NEWS? THAT's a crisis.

Oh,Uptonk - it's NBC. Home of Chuck Todd and the Killer Show (aka Dateline). The home of misogyny (Ann Curry), anti-asian behaviour (Ann Curry), sexual deviants (Matt Lauer) and Deborah Norville! They ARE a crisis. It's no wonder they lost their decades long #1 news shows to other networks. They are HORRIBLE. Yes, even Lester Holt