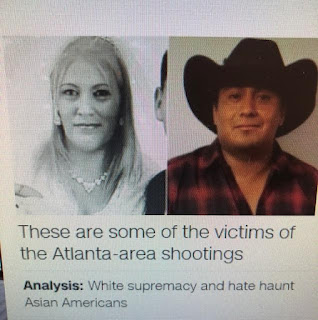 While I can't say I'm a fan of CNN, they are like the Verizon of cable news.  You see, I believe it was Consumer Reports that called Verizon the best of the worst when it came to cellular carriers.
So it was disappointing, but not surprising, to see the featured story (to your left) on their website.
Quick math will show you how systemic racism works - even at a network that concurrently was 'printing' stories about how Asian hate is a thing.
Mathematically, let's break this down for CNN:
8  - Deaths
6 -  of those were Asian
2 - the number of victims featured in their story
0 -  the number of them who were Asian
I think the scary thing is - probably few even noticed. Certainly not their editors.
This behaviour is so engrained and even tolerated that this comes across as acceptable. It is no wonder that police and the judicial system have (and probably will) let the the murderer get off with nary a slap.
News has to be better than this - but we know they're not. Beholden to ratings and advertising dollars leaves little room for facts, integrity and the complete lack of investigational journalism. I think the last five years have confirmed that - though it was certainly a problem before BLOTUS.
Let's hope things change. Because sure as hell, I sent that photo capture I snagged and sent it to CNN.
Song by: Janet Jackson
Posted by Blobby at 12:07 AM

I daily give time to watching reports on American networks, including CNN, via YouTube subscription, but also those from rather more 'progressive' outlets. To say what you point out is 'sad' is to skate over it. It's much more insidious than that. Good on you for having brought it to their attention, as I hope others have also done. The best they can do now is to acknowledge and apologise for their ugly faux-pas.

One of the Victims was an Asian Single mother, a schoolteacher , turned to more lucrative work, I have no idea what any of these murdered people did , but once Again it appears it’s White trying to Cover up for White .

I know a number of the Asian victims were not identified yet, so their names and likenesses were not available and would not be so until proper next of kin were notified. That is standard procedure. I am not sure when the CNN report aired, but this was true as of 5:30 central time yesterday.