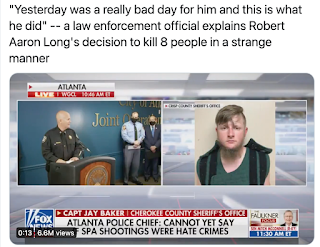 What can one say about another mass shooting by another white domestic terrorist disturbed young man?
Well, if you're the Atlanta police chief, you just say the poor wittle boy was just having a "really bad day".
What. The. Actual. Fuck.
If the suspect weren't white (shhhh......read: black!), he wouldn't even be arrested. He'd be dead.
Also, you'd charge the shooting as a hate crime, not a sex one.
There are special rules for white folk when it comes to "justice".  Ask RAPIST Brock Turner (oh yes, I'm saying his name, and linking his legal wiki, so every employer or potential date he ever has that Gooooogles him his sordid past shows up).
I won't lie - I didn't the anti-Asian theory seriously at first. My initial thought was anti-female. I guess it doesn't have to be one or the other. And the last year has been very anti-Asian. Why don't you ask the same fucking Atlanta police chief............... 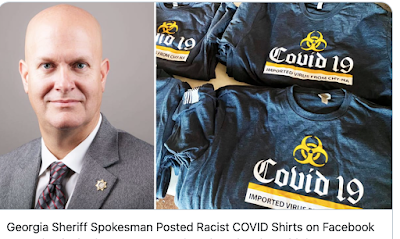 It is no wonder he'd not going to go hard on a white, Asian-hating, woman-hating killer. At this point, I'm guessing the police chief is feeling down in the dumps because he didn't get to pull the trigger himself. On the women, that is - not the killer himself.
I would love to say I hope the prosecutor is better at his job, but A. it's Georgia, so........ and B. history does not support actual (let alone, equal) justice for white males.
Perhaps this the case that will turn the tide, but I don't see that happening - see A and B above.
Song by: Taj Mahal
Posted by Blobby at 12:07 AM

This is racist, misogynistic, white-privileged America at it's absolute worst. He had a "bad day". F that cop. There's some serious enlightenment coming his way. I hope they fire his racist ass.

Tired of the violence. Tired of guns. Tired of people's lives being considered less than or unimportant. Would have this dude said that if he was black and went into the suburbs and blew away a bunch of lawyers? Or soccer moms? Naw.

The whole narrative would be different. But watch... this will blow over. Swept under. The story will go away and this douche of a sheriff will still have a gun.

Georgia? WTF? Stacey Abrams job just got a lot harder, too - thanks to all those voting restrictions. Why would you want to REMAIN a f'ed up craphole?

it's a hate crime, an anti-woman crime, pure and simple. a crime committed by a white male domestic terrorist.

Racist America, where you can murder a bunch of Asian women but it's not hate.

Oh yes.
The Twinky excuse for the XXI century. A 'really bad day'. And the bullshit of the sex addiction. He's also portrayed as a 'boy'. I remember Tamir Rice (who was 12) was called 'a man'.
The double standard is appalling. Appalling.