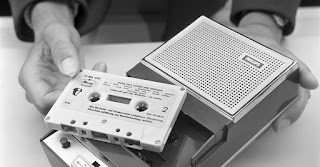 The inventor of the cassette tape, Lou Ottens, has died at the age of 94.
In the '70s, we were a cassette family. I suppose it could have gone south if my father had found 8-track first.
As it was, he was a Betamax instead of VHS guy, so......50 / 50 on his decision making skills?
My memory of his first cassette deck is vivid.
I wish I remembered the year, but I'm guessing 1973-ish? I went with him to pick it up. True to my father's frugalness, he actually found a way to buy new technology that was already used.
The place was a seemingly rented room in a house in our bucolic town, which was right next to the "insane asylum".
Of course, Windsor, wasn't really for the insane.........I don't think. It was a mental hospital, for sure. It was also the burn you'd get when someone would try to insult you that "your mom goes to Windsor".  Hilarious!!  Years later, 710 would have that hospital as a client - and I got a sweatshirt with their name on it out of the deal.
Still, we get the device home and it already has a pre-recorded cassette in there.  Uriah Heep. The progressive rock band, not the character from Dickens' David Copperfield.  I'm sure we listened to it, as we had music there in the tape deck, but I cannot imagine my dad actually listening to it.
My parents rarely bought any music since after Glenn Miller disappeared. I was raised on big band music and Broadway and Hollywood musicals. You probably don't want to get into a nature vs nurture discussion with me.
And at this point - most of my father's music was on reel-to-reel. Yes. You read that correctly.
But he has some albums and some blank cassettes, which he purchased before actually getting the deck. Knowing nothing about it all - as he is recording one of his records on tape, one of my sisters started talking.  I told her to "ssshhhhhhh....", as I assumed when you recorded something, it picked up the other audible somethings in the room.
I was wrong.
I'd end up having cassette decks in my house, and every car up until 2001. Hell, I had a DUAL cassette deck, so you could record tape to tape.   Smell me!
Like vinyl, the hipster crowd would try to revive that medium. THANKS Arcade Fire.  They would not be successful. It served me well, but its time - and the hiss and unspooling and caught tape - has passed.
Not unlike Lou Ottens.
Song by: Jack Johnson
Posted by Blobby at 12:07 AM

My dad was an 8-track guy. Didn't last long. I followed in his footsteps by picking Betamax. And now I have an attic full of CDs that have all been ripped into Itunes. At least the vinyl is all gone. PS... my first pre-recorded cassette was "The Archies." You haven't lived until you've heard "Sugar Sugar" as the player's batteries slowly die. Don't judge.

LOL. OMG. I can hear the slowness of Veronica's tambourining as I write this. HILARIOUS. ....and you've seen m music choices. I'm hardly in a position to judge. Though I probably do.

I remember the change away from eight track to, Cassette to CD .I still. Have the cassettes and a Sony cassette CD player along with my Bose wave machine. I’m lost somewhere in 2000 but happy. I have a lot of Eagles and classical on cassettes. I bought VHS and have a VHS to DVD converter. But then again I had a CB radio! Had Pfizer #2 Wednesday. Greatful for the vaccine and to be done for now.

I had an early Panasonic cassette player, recorder. I remember buying it at K-mart, I was probably 10 or 11 years old. Big a gray.

I still use daily a Walkman radio/cassette player [Remember those? If you're young, you won't]. Remains fine for radio listening. Regretfully, too many of my thousand or so audio-cassettes have now deteriorated beyond play-ability. Loads and loads of memory-evocations were stored in them, the soundtrack to much of my life, now hopelessly inaccessible. It pains to think about it. :-(

I remember when cassettes first came out... yes - THAT OLD, dear. I hated them. They were so little. I loved album covers and lyrics I could read! But, of course I got on board. I remember all those portable tape decks... pre-boom box era. So funny. And my friends and I made up and recorded radio shows. Such a gas. Thanks for the memories.

I am loving my cassette player I got at Christmas time.