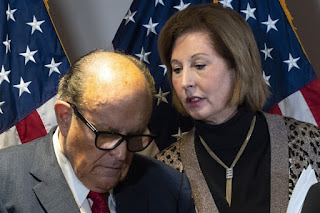 Then she got sued.

Dominion voting systems wants $1.3 BILLION (with a 'B') from this chick, and I'm guessing she's not even good for HALF of that.

It's her defense that is scary. .....and on so many levels:   “No reasonable person would conclude that the statements were truly statements of fact,” argued lawyers for Powell (who, btw, is not Rudy G.).

First off - I love that a lawyer needs a lawyer. She must be great at her craft if she truly can't even defend herself.

Well, let's see what that standard is (and yes, I know I ended that sentence in a preposition - sue me!  ha! get it?).  And now let's cross reference that with the fucking loons you took with you to places like Michigan (again, still not talking about Rudy).

Because that is EXACTLY what I'd be asking you on the stand and in depositions if I were Dominion's legal counsel.

Here is why this twat might win: Tucker Fucking Carlson.

So.......my takeaway then: I'm reasonable. I sure as fuck don't take Carlson seriously.

This is going to have to be a judge trial for sure, because 12 jurors?  She's either gonna get the fucks who thought her statements were real and call them unreasonable, or she's gonna have 12 reasonable ones who see her for the lying sack of shit she is.

Song by: the Carpenters

Hard to get fired up about Sidney “ The Cracked Head” Powell! If Dominion can sue for 1.3 billion then they fu**ing better be able to take care of business. All this Former Blotus shit needs to go away and Bernie Sanders needs to STFU too!

Actually... JDW - I would like to hear MORE from Bernie and Elizabeth Warren, too. We have four years, kids. Let's get things done. And the more progressive, the better. Half measures aren't going to cut it. Sorry - got distracted.

The 'C' word is offensive. Period. No wiggle room, sorry.

I agree with you about Powell, but also think you can make your case without resorting to such. You're better than that.

I don't care what happens to her. I do hope Dominion is successful with all their lawsuits. And Tucker is a ridiculous person, but I had not heard that Fox won a lawsuit claiming that no on takes him seriously. Interesting.

Regarding the comparison between Tucker and Syndey, there is no comparison. Here's why:

Sidney is a lawyer (well, she graduated from a law school, and lawyers are governed by codes of ethics - really, it's true - and they are governed by procedural rules. And under Federal Statute - and I am not a lawyer, but I have many friends who are who specialize in Federal Court jurisdictions and cases, a lawyer may not bring a case of a capricious, or false nature. Moreover, lawyers cannot lie, mislead, or cause mayhem in their capacity. A lawyer who brings a false suit to the courts faces penalties and potential disbarment.

And her is the catch-22 - Judges and courts don't like being toyed with. Federal court is not like a TV Drama - they do not like or even tolerate bull shit, including theatrics. So she already had a foot in trouble, and now, her attorneys issue this mess of a document, which can be used against her by Dominion in their pursuit of a judgment against her.

The other delicious thing about this document is that it points are the former President and his supporters and literally says that he is not a reasonable (mentally put together) person.

So if they think they are being clever, they just shot themselves in the foot.