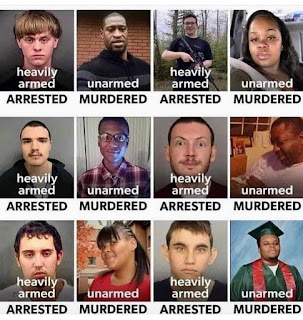 I'm not even surprised or shocked by another mass shooting. Let alone right after one less than two weeks ago.

Clearly, I'm not shocked or awed that the shooter - or shooters - were white.

Yeah yeah, you might get a suicide bomber in the middle east, but it's rare  - if ever - that you get a person of colour shooting multiple people, or dozens.

They are always white. And they're always taken alive, usually without incident.

Naturally, 'mental health' has been brought up. And his possibility of being Muslim. And he might be, but you know, he's White-Muslim. So, the authorities are going to have a harder time selling that without some olive in his skin.

Should he be Muslim, of course they'll vilify him - and he should be, but for the murder, not his background. If he were christian (small 'c'), he'd just have had a 'really bad day'.

And that folks, continues your day's lesson on 'white privilege' and 'systemic racism'.

Sick. Absolutely appalling. And yet, rather than ban assault rifles, we'll just be like Alabama and talk about Yoga. Sigh. This world. And the inequality? I used to think that black people who talked about having a target on their backs were being melodramatic... but the proof is in the pudding.