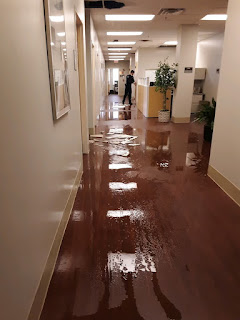 I have been temporarily been semi-displaced at work.

The floor on which my main campus office sits somehow got flooded over the weekend.

Oddly, an education coordinator went in to the office on Sunday and found it this way (to your right).  I think I was the last one to leave on Friday, and I'm 99.99% sure it wasn't anything I did, but there is no real way of knowing when the rain to terror (see what I did there?)  started.

In theory, security is supposed to be making rounds, but we're a little off the beaten path in terms of the patient care areas, so I don't think it happens as often as they say it does.

It seems something on the roof leaked, yet the floor between us and the roof didn't really get touched and the floor below is worse off than the hit we took.

As it is, my office was mostly spared. Water got under the door and ruined a box of basically nothing. Possible water damage on the legs of two of my chairs, but it never quite made it to, or beyond, my desk.

Still, my wing of the floor is deemed 'uninhabitable'. 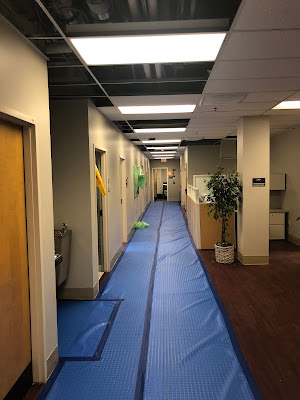 Potential mold and mold spores are the rationale. So, us folk had to find other places from which to work, be it home or wherever.

As it happens, I have a second office in another location - which is still pretty empty. Maybe 10% full. Even then, it's a private office avec door, but no one is ever around.  Honestly in my 'section' which might have 200 cubes, I can count on one hand how many people are there.

So for the next 2-3 weeks (or in construction terms 4-5), I will be working there or from home.

It's the constant noise of the always running dehumidifiers that would drive me nuts. As it is, I won't have to hear them from 10 miles away.

The best thing is it’s not at your house. The worst thing is , mold remediation , that is a big thing in tropical places. One wonders what could happen in a weekend. And how many hundreds of years have we been around unremediated surfaces. Hope you get to work from home. Hope the crocuses bloom soon!

Mold is the worst. Hopefully they catch it early. I would say enjoy your time away from the office, but... oh, no... you still gotta work :)