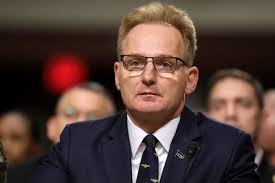 No offense to the troops, but fuck supporting the troops. The offense is meant for the brass.

I have no idea why the average U.S. citizen should support the troops when the military themselves will not do the same.

<----- This dick, Thomas Modly, acting Navy Secretary (another 'acting', because BLOTUS won't get permanent positions for anyone) not only called Captain Crozier "stupid" to the sailors who cheered him a hero (and let's face it - he is!), but then went on to berate the same sailors for cheering for the captain.

Modly left active duty 30 years ago, after spending seven in it, so clearly he's competent to run the Navy. I'm embarrassed to say he was raised in Cleveland.

But like all BLOTUS appointees, he doubles down on stupid and states "I stand by every word I said, even, regrettably any profanity that may have been used for emphasis."

But lo and behold, Monday night he issues this (partial response on my end):"Let me be clear, I do not think Captain Brett Crozier is naïve nor stupid. I think, and always believed him to be the opposite."

I am guessing the pseudo / faux apology is the reason for his downfall / resignation.

BLOTUS has to believe Modly's a loser for not sticking to the script. Pressure or not, from either side, the man is weak and evil - just like the administration.

Still, here's why not to support the troops: Crozier.

Yes, he sounded the virtual alarm, seemingly concerned about the lives in his command - nearly 4,000 of them. His letter stating, since we are not at war, sailors do not need to die - meaning of Covid-19, of which as of five days ago 100 soldiers had it, with an unknown number exposed, though safe to say possibly all 4,000.

Crozier was fired for sending a letter stating he wanted to help his soldiers. He was deemed weak. In fact he was strong.

.....in other news, semi-functional alcoholic, Stephanie Grisham is out as WH press secretary. The easiest $170,000 (pro-rated, natch) she's ever earned, since she did not hold one press conference. Possibly because she was drunk. It's unclear, but I hold this to be true until she proves me wrong.

...and in less than one week, BLOTUS dismisses the oversight group who distributes the Covid emergency funds. Nope..........nothing fishy about that!

And we are all letting him get away with it.  WHY can no governing body do a fucking thing about a criminal in plain sight???

I honestly do not get it.

Song by: Village People
Posted by Blobby at 12:07 AM

If you'd asked me 12 months ago whether I liked the idea of being on a ship with 4000 sailors you might have got a different answer. I think these organisations wrap themselves up in chains of command, when sometimes someone (The Captain) just has to tell people how it is. I think you might find he comes out better from this than the rest of them.
JP

if obama pulled the same shit as the dump has, obama would have been tossed out in 7 days.