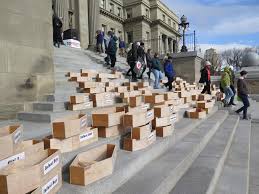 How does one start a protest at the White House, when one does not live in proximity to Washington DC, and is not Jane Fonda flying there each week?

As the coronavirus rages on, and depending on to whom you listen, we will be peaking in two weeks or a month and two weeks (or possibly both, depending on location), the numbers of the known dead are going to pile up.

More actually. Way more. They are not doing post-mortem testing on any others that are possible, or even suspected.

This is a MAJOR election year.  ....and bodies will be piling up on BLOTUS' watch.

I think someone needs to take over Lafayette Park and place a coffin for each 100 deaths there are due to the incompetent covid preparation by this administration.

While the idea of a coffin per person would be great, it seems unrealistic to have 80,000 - 200,000 caskets there. But one per thousand doesn't seem to drive the point home of the amount of dead.

In my pea-brain, one per hundred would make a point. One that should be visible up to November 3, 2020.

First off there are a few complications.

With the number of dead, funeral homes and casket makers might not have enough supply for such an on-going protest.

Then there is the issue of paying for, getting, transporting, stacking (or arranging) of said coffins and someone keeping watch so some MAGA asshole doesn't destroy this.

Oh, and a permit. I think a permit would be in need. Though tons of people protest in that park all the time and you know they don't have one. But they also don't have 2,000 coffins.

Let's let America see our shame. Let the voters remember this is on the White House doorstep, literally and figuratively.  And let's keep the coffins there until Jan 20, 2021, when whomever is not BLOTUS is at their inauguration.

I just need help getting this going.


....as it is, New York is already burying their dead in mass graves. 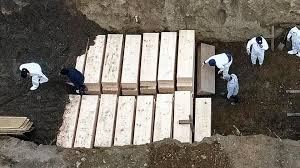 Song by: Linda Ronstadt & Emmylou Harris
Posted by Blobby at 12:07 AM

and the dump doesn't care how many citizens die.

Those "mass graves" the media hyped in New York are Harts Island. Hart's Island is where homeless / unclaimed bodies from NYC are buried. They average about 2000 burials there a year.

I sense even this will not dismay thems who adore Trump from voting otherwise; thems in government who do his bidding will not change neither.

A. I know why the mass graves are there - the 2000 per year for 2020 will easily be surpasses.
B. Agreed Spo. What it will hopefully do is get people who DON'T vote to actually go to the polls.