So, there we were - taking Shep on a three mile hike, and socially distancing ourselves each other, as well as others.

Early into the hike, 710 gets a Presidential Warning on his iPhone. It kind of took me back for two reasons:  1. I didn't get a presidential warning.  2. a surprisingly unsurprising determination on national shutdown. 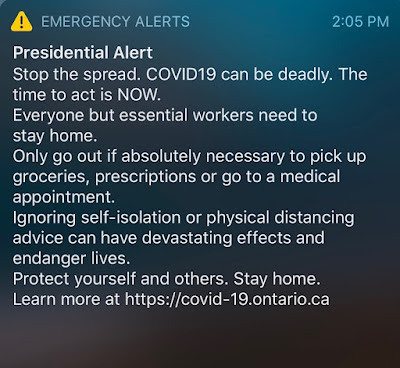 Except that it wasn't.

We started discussing this right away. And keep in mind, we were on a hiking trail and didn't look look at it that closely.  The url you're directed to isn't even in the U.S. 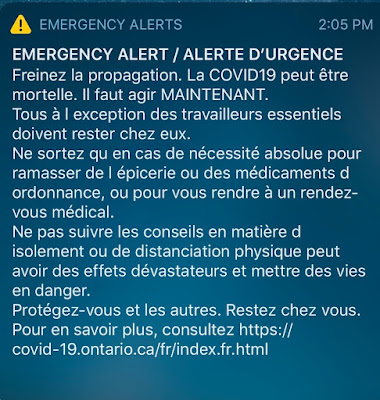 I mean, if nothing else, Spanish is the U.S.'s second language, not French.

But then, should this be from Canada, I mean, they don't have a President.  Everything seemed wrong about it.

During our out and about we talked about how, or if it would be different than what we're already doing in Ohio. We assumed it would just be because the eight asshole states who aren't already doing a stay in place. We had hoped there wouldn't be another assault on the grocery stores, as we are now three weeks into our process. But people are a bunch of panic-like folk. Clearly not taking it serious enough to stay home or not stay less than six feel apart, but enough so that you can't find a bottle of bleach of a four pack of toilet paper.

As the Doors sang, "people are strange".

After the hike, and back the car, 710 started looking at the Washington Post, NYT, CNN, anything that gave us more info. There was none. .....and I mean NONE.

Nothing about the U.S. or Canada releasing such a statement. So........what the hell?  There didn't seem to be any notice of a fake notice.

And not only that, it completely ruined my joke, which made 710 laugh.

After we assumed it was from BLOTUS and we discussed how he said we would never go on a national stay in place, I said, "awww.........it's Tiffany's first text from here dad!".

that ain't from the dump; the dump wants us all to drop dead.

covid-19.ontario.ca = it's from the canadian government (the .ca gives it away). but is it REALLY from canada, or some russian bot?

"Presidential" is not a word we use here in Canada... plus why an American number gets a Canadian "alert"? That whole thing is very strange.