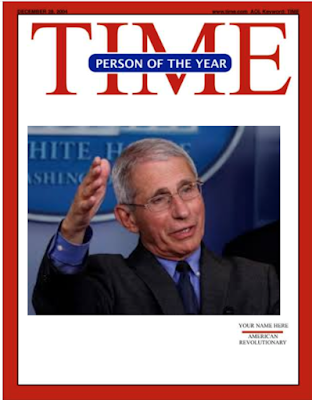 It has to just burn in BLOTUS' craw that almost no matter what happens the rest of 2020, that in April of this year, Anthony Fauci has already secured Time's Person of the Year.

I would think even a Biden landslide wouldn't sway Dr. Fauci from this position.  .....and rightfully so

I am not 100% sure BLOTUS can even fire Fauci. He's twated he should be canned, but if he were the one to do it, why wouldn't he just do it?

But I don't put it past BLOTUS to withhold NIH funding should he not get his way.

Fauci could and would be a martyr should any firing transpire. On another note, he'd also be off the hook to how much he's probably been holding back. I can only imagine the tv appearances he can do - telling tales of White House incompetence.  In theory, that show could last longer than the 30 year run of the Simpsons.

I did not watch BLOTUS' meeting yesterday. I almost never do, as I get so upset.  Someone said it was 'off the rails'.  Yeah - I've heard that1.032 times since he's taken office. I don't believe there is a 'rock bottom' for this guy anymore. And even IF off the rails, no one is stopping him - nor does it look like they're even trying to. I did see that FINALLY, both MSNBC and CNN used the word 'propaganda' in their headlines.


But congratulations to Dr. Anthony Fauci for his future success.

Song by: Alan Parsons Project
Posted by Blobby at 12:07 AM

a person of the year pick already; yeah, this is gonna piss off the fat orange pus bag.

Who would have thought that just at the time of one of the biggest catastrophes humanity has ever been faced with, the most powerful person on Earth is also the one who makes it even worse than it need be!