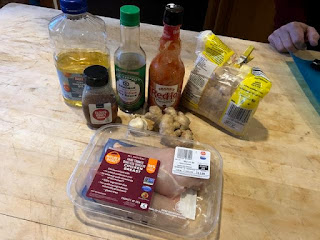 As we go on and on with our Shelter in Place, which I think will easily be extended past the April 6 timeline, we have more time to make meals and try new stuff.

Since our commute has been cut down to zero, we are 'home' earlier and can do better than throwing together our staples and stand-bys.

710 found a recipe for Sweet, Sticky & Spicy chicken. Honest to g-d, peeling the ginger was the most time consuming thing in the entire prep. The whole things comes together easily - though of course, in retrospect, we would have done things differently. I shall point them out along the way. 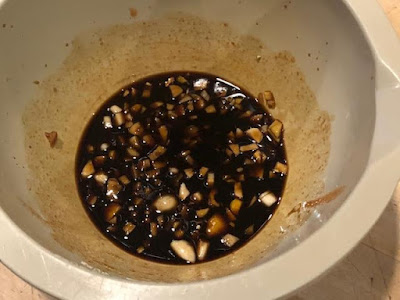 Mix together brown sugar, honey, soy sauce, ginger, garlic and hot sauce in a small bowl. Done!
The retrospect part here is: I know I used more than 2t of ginger, but I had already peeled and chopped it - why toss it? So into the sauce it went.  And the two T of hot sauce, I might cut back to one - as this has some burn to it when completed.

If you like 'sauce' we made the normal amount for half the chicken (we only had two breasts, not four). Complaints about the recipe in its original form was that it didn't provide enough sauce. In our estimation, neither did sauce for four, chicken for two. If you make four breasts, you might want to up the proportions for what's in the bowl above. 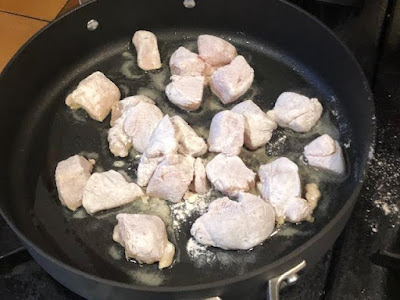 While it doesn't say to flour the chicken, we did for better browning. I suppose you can skip that step if you'd like. 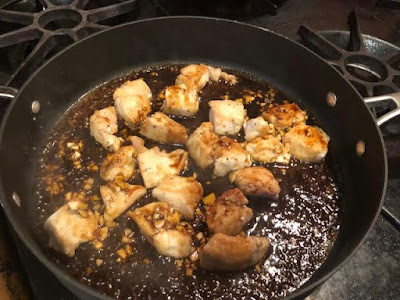 Heat oil in a large skillet over medium heat. Add chicken cubes and brown on both sides, about 1 minute per side. Pour the sauce over the chicken. Simmer uncovered until the sauce thickens, 8 to 10 minutes.

The sauce would cover nicely and thicken up a bit. Maybe due to the flour?  Yeah. Probably. 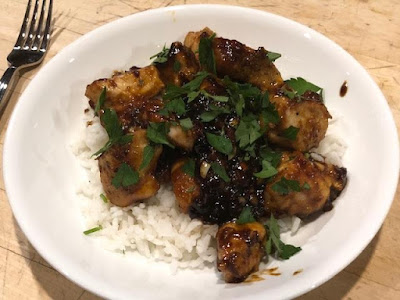 A little rice. A little parsley. It looked and tasted great, but as I said, it had a kick and a burn that lasted. So the white rice helped.

Easy to make, quick clean-up. Everything was in our pantry or fridge, so it was easy-peasy.
Posted by Blobby at 12:07 AM