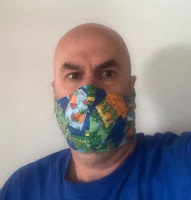 We, here in Ohio, have come to that point where it is recommended one go out with a mask.

But mostly likely, like one big fat BLOTUS, I have zero ability in the art of crafts.

N95 and surgical masks should be reserved for medical worker. That said, even the hospital in which I work has made 33,000 homemade masks to fill the gap in what the supply chain cannot supply.

Cloth masks are designed to protect others from virus spread by the mask wearer, not the other way around. They may cut down on some large respiratory droplets from a cough or sneeze, but it’s unclear whether it will also catch smaller droplets called aerosols that are released by just breathing or talking.

It's likely a small measure, but one that will hopefully keep me off a ventilator and dying in a hospital alone. Yes, that thought has give me much anxiety over the last few weeks.

Anyhoo.......while I now rarely go out, save for dog walks, should I venture to a place with any population, for the time being, I shall now wear a mask.

The problem of getting a mask has been monumental, for hospitals and regular folk. I just happen to know someone who has a skill and had resources and materials - - and a very very kind heart.

Besides being a crack A psychiatrist, dog lover, voracious reader, consistent blogger and general all round good guy - he also, as you know makes shirts.  With those shirts comes excess material - of which he holds on to.

Spo offered to make a mask for both 710 and myself. I had thanked him, but told him that his making them for his favourite cashier and folks he interacts with was much more important. Still he persisted.  And I humbly accepted his kind offer.

And while he joked of making a U of M one for me, I told him I'd wear with pride. As it turns out, he had an orange one for me. Until I made a light-hearted comment.

I mentioned, "too bad you don't have the shirt of shirts material, that could be funny." As it turns out, he did indeed have leftover material from the infamous shirt that traveled the globe.

While I no longer have the shirt, I am the only one with coordinated outfit. 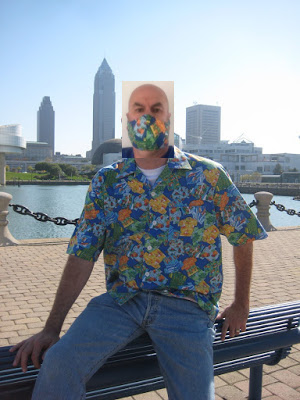 I thanked Spo profusely, and told him, I would hopefully be the envy of all............and now not die in a hospital all alone.

I too wore "the shirt of shirts"; your matchy-matchy pix reminds me of better days. and better days will come.

I love that mask and the shirt! Nice!

I am gladdened the masks are appreciated.
A caveat: I've discovered people like to lean in to look at the patterns. Tell'em to keep away hohoho